Latest AP story (yes, another) reports a new fishing license bill in Legislature, but will it be enforced if passed?


“
A legislative committee passed the bill that will require fishing boat owners who want a commercial license in Hawaii to provide state officials with a copy of employment contracts held with every fisherman on board before the license is granted.

Without those contracts, there’s no way for state officials to check whether fishermen are getting what they were promised or if an investigation should be launched about possible human trafficking, said Rep. Kaniela Ing, who introduced the proposal.—AP story 2/14/2017, Hawaii bill seeks more oversight of commercial fishing
”
Older article:
“
In a document signed by Bruce Anderson, the administrator for the department that issues fishing licenses, the department recommended denying the rule changes because the petition focused on labor issues that are outside the department’s jurisdiction.—AP story 10/14/2016, Hawaii Agency Rejects Rule to Protect Foreign Fishermen
” 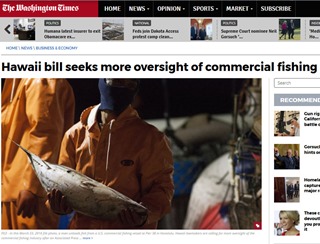 A new article by local AP reporter Cathy Bussewitz is appearing in newspapers across the country. The first pull-quote above is from the Washington Times, as an example of the penetration of these stories in the national media.

What the pull-quote describes is a labor issue—that is, the Department of Land and Natural Resources is being asked to assure that fishermen “are getting what they were promised.”

Back in October Anderson was referring to rule changes proposed in a petition to the DLNR [disclosure: I was one of the petitioners] to change the rules for licensing the foreign fishermen. The changes were not “labor issues” and the law in question was a conservation law, not a labor law.

But Anderson has made himself clear, and in fact, the bill before Hawaii’s state legislature would seem to require DLNR to enforce labor protections.

Given Anderson’s refusal earlier, and his refusal to enforce the clear provisions of Hawaii law that prohibit DLNR from issuing fishing licenses to fisherman who cannot set foot on Hawaii soil, how can lawmakers expect he will enforce the provisions of this bill, should they become law?

Passing laws is good, and it is important to support new lawmaking that could make a difference to the foreign fishermen. But like Hawaii’s traffic laws, which are seldom enforced at least in Honolulu, laws by themselves make little to no difference if no one puts them into effect.

DLNR has refused to enforce existing state law, and so the stream of AP stories will continue. In the end, it is likely that Governor Ige’s government will cave in the face of the ongoing bad publicity.

That’s not the best thing for Hawaii, or for the fishermen. Ige should not wait to see what happens with the new legislation. He could call Anderson to his office and ask why current law is not being enforced. That can be done now, it doesn’t have to wait until the end of the legislative session in May.

Even if the new legislation passes, the issuance of fishing license to unlanded fishermen is still against Hawaii law.

The new legislation will either pass or not, but for sure what happens to it will be news around the country once again. Hawaii’s failure to deal with a humanitarian issue is on display for all to see.

I’ll end the way many tweets do these days: Sad.