Tonight we’re going to enjoy Hawaii-caught fish that is completely traceable—so that we know that we won’t be feasting at the expense of trafficked foreign fishermen. Update: Thursday night’s pic added at the bottom of this article.

Eliminating human trafficking: laws are a beginning but must be enforced

Four months after the Associated Press revealed near slave labor conditions aboard some ships in the Hawaii longline fishing fleet, nothing has changed. The practice of employing foreign fishermen who cannot set foot in Hawaii to ask for help, to complain, or to seek medical treatment or who may be forced to work long hours in unsafe conditions continues.

It is possible that the Hawaii State Legislature may take action this session intended to help eliminate human trafficking and near slave labor conditions in the fleet. West Hawaii Today posted a report on the start of the legislative session that includes this possibility.

“If there’s anything we can do to stop human trafficking or unfair labor in the state, we have to do it,” said state Rep. Kaniela Ing, chairman of the Ocean, Marine Resources and Hawaiian Affairs Committee. “We’re under a moral obligation to create a system that wouldn’t allow this to happen.”

Ing is floating a bill to require fishing boat operators to use licensed commercial agencies to hire workers.

The strategy would allow the state to gain access to employment contracts between the agencies and fishermen, which would permit periodic audits to make sure the boats are in compliance with those contracts, he said.

A properly designed bill could turn the tide (sorry) on this issue, but even passage of a new law would not be reason to declare victory over this form of oppression, which has embarrased the state nationally and internationally in the media. There already is a state law (HRS §189-5) prohibiting the licensing of the foreign fishermen, but the state has chosen not to enforce it.

While a legislature can pass laws, it is up to the administrative branch of government to enforce those laws. Hawaii’s Department of Land and Natural Resources has so far been unwilling to enforce the laws already on the books.

Here’s one way to purchase the freshest fish—and to be sure that it was caught without the taint of human slavery.

Last week’s fish from Local I'a was ahi, and this week’s is aku.

Each bag of fish is labeled with a number and a QR code that can be used to trace the fish and verify that it is sustainably caught.

Here’s a screenshot of some of the info for last week’s fish: 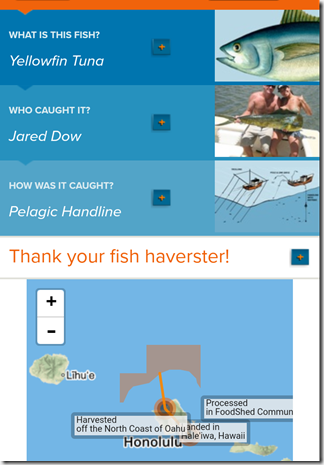 Information includes the species of fish, who caught it, and where it was harvested, landed and processed.

There’s more information for the clicking: 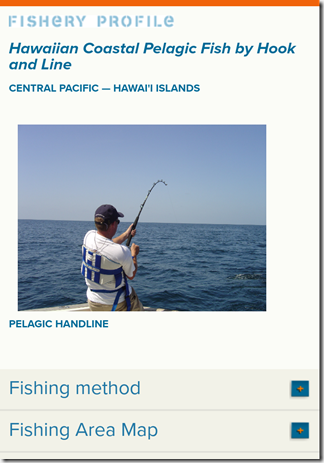 Clicking further yields information on the person who caught the fish and on how it was caught:

This fishery uses a variety of artisanal hook-and-line methods to catch coastal pelagic fish such as tuna, marlin, swordfish, mahi mahi, wahoo (ono) and others. A pole and line with live bait scattered into the water is used to catch feeding skipjack tuna. Trolling with lures and lines, and  handlines with lures, lines and bait bags are used to target larger fish such as bigeye tuna, swordfish, mahi mahi and wahoo.

The technology exists to trace any fish, even those caught within the longline fleet. Of course, the Hawaii Fish Auction would not do well if it was revealed that much of their fish is caught under questionable circumstances. So don’t expect your fish to have QR codes on ‘em any time soon—unless you buy them via a CSF.

I can’t end this article without at least some snapshots of how Nanette prepared the ahi. The fish share was large enough for three meals for the two of us. We started out with ahi sashimi on the day she picked up our share. Here’s the pic: 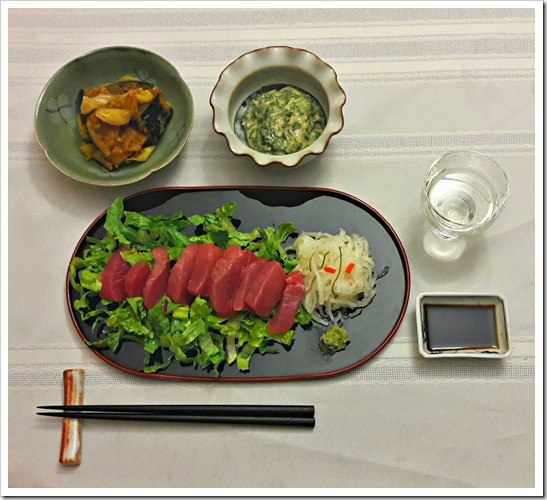 And two preparations of aku (katsuo) from last year: 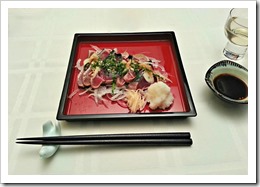 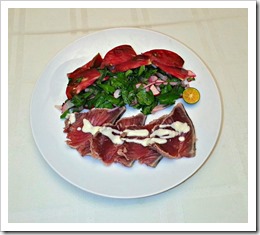 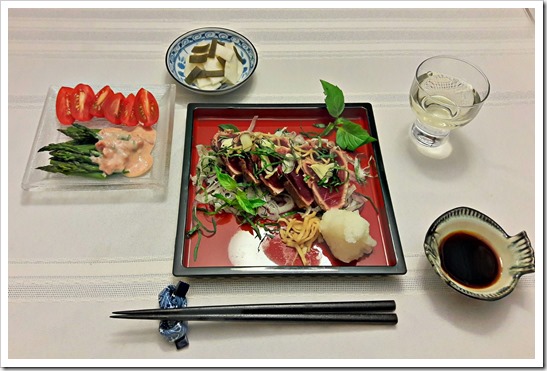