Hawaii state government spends $72,600 to monitor social media only to get cut off


“
Social media monitoring allows police to constantly target, track, and archive information posted on social media from millions of people. It can be used by law enforcement to monitor and log posts on popular sites such as Facebook, Instagram, Twitter and YouTube, regarding everything from protests to potential threats.—pastemagazine.com
”

The Brennan Center for Justice queried law enforcement agencies across the country to see which were monitoring social media. Their research turned up purchases in the state of Hawaii (see documents below).

Snaptrends software was purchased in May of 2014 and yearly licenses renewed in two subsequent years. Each purchase was for $24,200 and covered seven licenses. 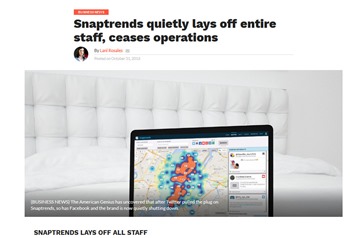 After a firestorm of protest erupted when news that Facebook, Twitter, and Instagram supplied data feeds to companies including Snaptrends, the social media companies cut off the APIs to these companies, denying them access to the data. A report, which has been disputed elsewhere, indicates that Snaptrends has now gone out of business.

The purchases were made for use at Hawaii’s Fusion Center, which shares information between the federal, state and county law enforcement organizations in Hawaii (see these Disappeared News articles on fusion centers and Hawaii’s fusion center). Presumably they were able to use the Snaptrends software from May 2014 until it was (reportedly) cut off sometime this October.

Police departments nationally have used this and similar software to monitor hashtags such as #BlackLivesMatter, #DontShoot, #ImUnarmed, #PoliceBrutality, and #ItsTimeforChange according to a report on the website pastemagazine.com. With the software police and other security agencies were (and probably still are) able to monitor, record and permanently log any social media traffic of interest.

Bottom line for Hawaii tweeters and Facebook users: the police are watching you. They are able to spend tens of thousands of dollars of taxpayer money (your money) to do this. And they are likely doing more than just watching—the software allows them to build a dossier on each of us, even though we have committed no crimes. By mapping the data, they will also know where you have been and whom you have met there.

The Brennan Center cautions that purchase of surveilance software does not prove it was used. In Hawaii’s case, they renewed through 2016 for seven licenses. If they did not use the software, then that is also a questionable use of taxpayer money. So it is safe to assume it was used and that data is on file for citizens not accused of any crime for a space of up to three years.

It’s clear that this power of surveilance has been misused nationally and will continue to be misused.

As any 15 year old knows, social media is also highly context-dependent. A journalist on the national security beat may follow a suspected terrorist for her reporting—but how will an automated software program, or an intelligence agency, know that the journalist doesn’t subscribe to the terrorist’s message? The situation is even more fraught for adolescents in areas with gangs, who might need to “like” a picture to keep themselves out of trouble with neighborhood gang members but simultaneously get into trouble with law enforcement; one teen spent nineteen months in Rikers Island for appearing in pictures with “crew” members and liking their Facebook posts.

For those not familiar with Rikers Island, people can and are held there in abominable conditions awaiting charging or trial for long periods of time. So that the teenager spent nineteen months there does not imply he did anything illegal.

Below are the two procurment documents posted by the Brennan Center for the Hawaii purchase they uncovered.

It's been common knowledge that CPS also pays its employees to scan facebook pages of parents in the child abuse system. We recommend that those parents privatize their facebook pages and cease posting anything about their family court case on social media.