The Oahu commuter ferry con is on again


“
“The intent is to get more cars off the road, to help alleviate the H-1 (and) H-2 merge, and so forth,” [Hawaii Department of Transportation Director Ford] Fuchigami said. “We have to be able to offer different modes of transportation to get people into town, to get cars off the road.”—Star-Advertiser front-page story
”
“
TheBoat, Honolulu's commuter ferry from Kalaeloa to Aloha Tower, gives West O'ahu residents an oceangoing alternative to increasingly clogged highways, for no more than $4 per round- trip ticket.

What makes the service so cheap is that Honolulu taxpayers pay an additional $120 per roundtrip rider to cover the actual costs of operating TheBoat, according to a city study.—Honolulu Advertiser, 2/15/2009
” Today’s story is interesting in several ways, most of them demonstrating that our Department of Transportation leaders may have a thing or two to learn about transportation. The newspaper, also—it covered the original Superferry so poorly that readers would likely not have known about the poor ride conditions and high cost of operation of the inter-island ferries. Today’s article didn’t mention the running cost of the earlier Oahu ferry.

The inter-island Superferry company ultimately declared bankruptcy, and certainly one contributing factor would have been that it seldom, if ever, make a profit, according to outside estimates at the time. The fuel cost of running those huge engines was likely not recouped from the ferry fares.

Just as our city department of transportation to this day has not said what the cost of running the train will be after it is built (recently: if it is built), the state DOT will have to tell commuters what they will pay and how much it will cost to operate. Why? Because they have tried this before, and it was an expensive fiasco. 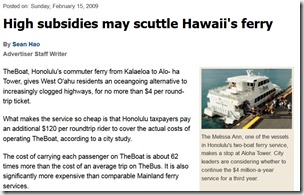 The cost of carrying each passenger on TheBoat is about 62 times more than the cost of an average trip on TheBus. It is also significantly more expensive than comparable Mainland ferry services.   [Honolulu Advertiser, High subsidies may scuttle Hawaii's ferry, 2/15/2009]

For nearly two years, TheBoat has been a little-used leg of Oahu's TheBus system, three 75-foot double-hulled vessels running six round trips daily, sailing between the Aloha Tower Marketplace and the growing communities of West Oahu.

TheBoat utilized vessels whose running cost was (or should have been) well known before they were put into service. It should have been easy to get that information: they had been in service elsewhere. Did the DOT ask? If so, Honolulu taxpayers were cheated badly by its mayor and city administration. Did they not even ask? Then I return to my question about competent leadership.

As to the claims about reducing traffic on the H-1, no one has so far refuted my oft-repeated observation that if the number of parking spaces in town, at UH and in Waikiki, remains the same, no cars will be removed from the H-1. If one person decides to commute to town by boat (or train, or even by bus), another car will take that parking place. In town parking places are a profit-making resource. Nor can I see UH tearing down any part of their parking structure. So cars will keep coming on the H-1.

In fact, rampant home construction in central Oahu means potentially adding even more cars. There’s no ferry, no train, that will reduce this.

Finally: So what benefit is left to public transportation in Honolulu? There are at least two benefits:

1)  If done right, it would boost retail and allow businesses to locate along the route. That would require a grade-level system. See the second video in this article. This would mean some local retail and supply-line jobs as well. A grade-level system going all the way to Waianae would create a long, local retail corridor that benefits everyone. Plus restaurants, coffee shops, churches, etc., all taking advantage of convenient grade-level transportation.

2) Public transportation increases the productivity of labor. Workers who are not car owners can be offered lower pay. This is true today.

Ok, done. The video above is still playing, isn’t it? Compare, if you like, after the train and potentially theBoat are running. By that time traffic should be even worse.