The #Fail heard ‘round the world: Hawaii DLNR refuses to revise its rules in order to eliminate human trafficking in Hawaii’s fishing fleet

I haven’t posted on the recent hearing before the Board of Land and Natural Resources on the petition to change the rules for licensing long-line fishermen because I’ve been too busy working on my testimony and then attending the hearing to give it, and on other hot projects. So yes, disclosure, I’m writing about something that I’m personally involved in.

But there’s no question it’s news. In fact, far from “disappeared news,” the story of the Board turning down our petition to revise the rules for fishing licenses has traveled far—it’s making its way internationally today. The story of BLNR’s failure to do anything about the conditions in the Hawaii fishing fleet that were uncovered in AP stories published September 8 has spread farther than all but those original stories. 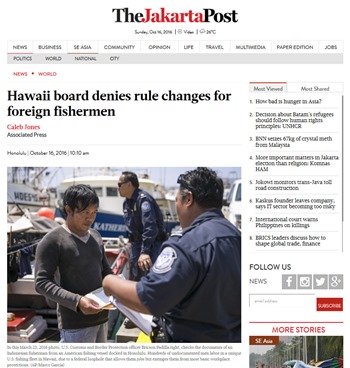 Here’s a screenshot of the story in the Jakarta Post. Basically the same article appeared on newspaper websites in Pakistan and elsewhere, including newspapers across this country.

Hawaii Department of Land and Natural Resources spokesman Dan Dennison confirmed the board's denial after its meeting on Friday.

"It was predicted but it's nevertheless disappointing," said petitioner Kathryn Xian, who runs the nonprofit Pacific Alliance to Stop Slavery. "The DLNR has really shirked its responsibility in doing an easy fix."

The original story, posted by the AP on the night of September 7, also spread far and wide. Here it is, for example: Impoverished Migrants Are Catching Hawaii’s Prized Seafood, Report Finds (Yahoo News, 9/7/2016).

So between September 7 or 8 and today, the Hawaii state government continues to license fishermen who are confined to their ships, in violation of state law—and they haven’t done a thing to fix it. Nothing has changed.

Do the petitioners give up? I don’t think so.

The petition was only one arrow in our quiver.