Seriously now, can Hawaii double domestic food production while ag land is being taken for development?


“
The carpenter needs work, but here it comes at the expense of the farmer.—quoting myself again
”

Should we be surprised? Here’s the same paper’s front page just two days ago: 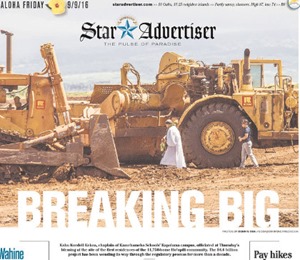 The cryptic headline is attached to a report of groundbreaking for the sprawling Hoopili development, located on what may be the best agricultural land on Oahu.Land use on Oahu is a municipal matter, and I don’t think there is much doubt that the City Council is in the pockets of the developers (see, for example, the data in this article). If so, the gov’s pledge hasn’t a chance.

It’s not just the City Council. Mayor Caldwell has been in the news this election season re questions about his “side job” for a bank that earns him $200,000 a year. It’s fair to ask if he has a conflict should development be a policy issue that his bank might have an interest in.

Without abundant land to be farmed it’s hard to see that agriculture can increase materially by 2030, and a campaign pledge of 2020 now sounds like a huge joke. On us, of course.

The pull-quote above is from a rant I posted in 2012, Hoopili, Koa Ridge: Part of Honolulu’s end game. A snip:

In Honolulu, the transformation from a Pacific island to Los Angeles by the Sea is approaching reality. Our city government sees no reason to restrain developers and gives in to each and every grand scheme. Residents of Honolulu, unlike, say, the concerned citizens of Portland, Oregon, are content to leave city planning, if there is such a thing here at all, to elected officials fattened by developers and related architects, engineers, and trade unions. The carpenter needs work, but here it comes at the expense of the farmer.

Paving over farmland is also well advanced. The lush Manoa valley used to be the breadbasket of Honolulu. Each day enough rain would fall, and then the sun would cause any kind of plant to grow. There were cows and horses, I’m told. But look at it now. Yes, lawns in the valley are lush and green, but they don’t feed anyone.

We already import almost all of our food, a situation which causes local money to fly out of state since supermarkets are owned by Mainland firms. What kind of idiots are we, to prefer canned vegetables to freshly grown?