Justice Department to end use of private prisons—when will Hawaii do the same?


“
“This is a huge deal. It is historic and groundbreaking,” said David Fathi, director of the ACLU National Prison Project. “For the last 35 years, the use of private prisons in this country has crept ever upward, and this is a startling and major reversal of that trend, and one that we hope will be followed by others.”—quoted in Washington Post article
”

Various news outlets reported today that the Justice Department will end its use of private prisons. 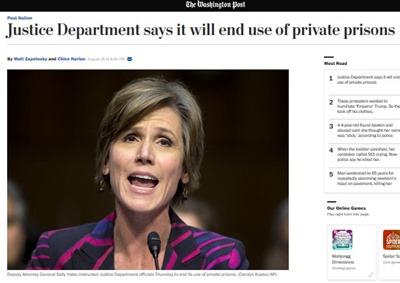 Deputy Attorney General Sally Yates announced the decision on Thursday in a memo that instructs officials to either decline to renew the contracts for private prison operators when they expire or “substantially reduce” the contracts’ scope. The goal, Yates wrote, is “reducing — and ultimately ending — our use of privately operated prisons.

[Washington Post, Justice Department says it will end use of private prisons, 8/18/2016]

This does not affect other federal agencies, for example ICE (Immigration and Customs Enforcement), but it is a beginning.

Former Governor Neil Abercrombie announced his intention to stop using private prisons on the Mainland, but did not follow through:

Ige’s predecessor, Neil Abercrombie, was a former probation officer who said bringing back Hawaii prisoners was one of his top priorities.

[Civil Beat, Ige: Number of Hawaii Inmates Imprisoned in Arizona Will Go Up Before it Goes Down, 8/3/2015] 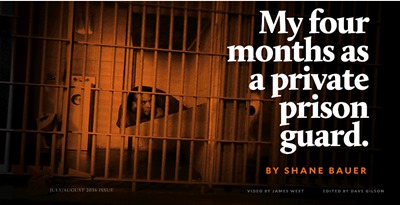 The DOJ decision follows the publication of an extensive exposé of conditions in private prisons conducted by Shane Bauer for Mother Jones. He spent four months working as a prison guard at Winn Correctional Facility a CCA (Corrections Corporation of America) prison in Louisiana. Read the Mother Jones article here. 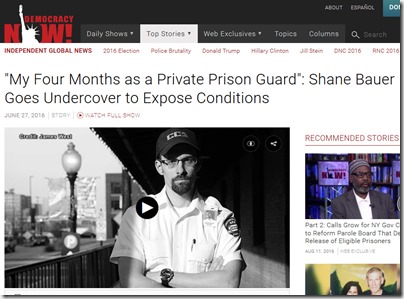 A Democracy Now interview is here.

See also the ongoing Civil Beat series, Hawaii Behind Bars with articles by reporter Rui Kaneya. Particularly troubling is that Hawaii prisoners are being subjected to “valley fever” in Arizona and reportedly not receiving proper treatment. The disease can be and has been fatal.

But that is only one of many abuses, including and especially the separation of inmates from communities that help them make a successful re-entry to society at the end of their sentence, and the devastating effect on their children and families:

Kat Brady, a Hawaii-based prisoner advocate, decries her state’s practice of shipping their prisoners to Arizona, stating that “our people have been moved around like chess pieces, sold to the lowest bidder, in essence. I hear the anguish of families, of children who miss their daddies, of wives struggling to keep their families together and the desperation of people trying to locate their loved ones.”

What to do with the prisoners? Brady suggests  reducing offenses that put people in prison in the first place. Too many of our state prisoners should not be in prison to begin with, and reducing their number would clearly reduce chronic overcrowding and the need to ship prisoners to private facilities on the Mainland.