Do you remember that bill that would increase motor vehicle registration fees and add even more to the gasoline tax?  The House tried to sneak a hearing in with inadequate public notice. The bill was heard this morning at 10:30 and ended up killed.

This controversial bill was granted a waiver at the request of the Chair of the Transportation Committee, Rep. Henry Aquino. Instead of 48 hours notice as required by House rules, the public was short-changed. 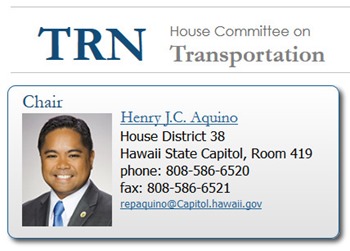 As usual, I try to include the photo and contact information of the perpetrator committee chair who cares so little for public notice. But keep in mind that waivers are routinely approved (if not actually requested, who knows) by the Speaker of the House.

This bill had little public support. Perhaps that is the reason the notice period was cut short. (??)

I discovered that I didn’t post the article below when I should have – I just forgot to push that “send” button. Sorry about that. So as not to waste an opportunity to rant and call out our errant House members for breaking the rules, here it is anyway…

Life teaches us that some people believe the rules don’t apply to them. Whether it’s parking in stalls reserved for handicapped drivers, or taking pets into stores that don’t permit them, plenty of people think they are more important that the rules.

I suspect something like that is going on at our state House.

Hearings are, according to long-standing rules, to be given at least 48-hour notice. At least one reason for this is crystal clear—so that the people may attend a hearing or possibly write and submit testimony, whether they attend or not.

It’s particularly frustrating (frustrating to both ethics and democratic principles as well) when one side, perhaps the industry affected (and which may also have written the bill!) somehow knows about the flash hearing and gives testimony while the general public is blindsided.

The crime often leaves no tracks in the public record

I don’t know if it’s a record, but it appears that the public had about three (count ‘em, three) minutes notice of a hearing called by House Finance Committee Chair Sylvia Luke. Here’s an email report from Hawaii Thousand Friends:

HTF received notice of a 2:00 Thursday 3/3 FIN hearing TODAY 3/3 at 1:57. The notice lists 24 bills to be added to the 3/3 FIN hearing agenda. Interestingly the only bills on the agenda were the listed 24 bills.

This out-of-public-sight move is possible because FIN chair Rep. Sylvia Luke asked for and received a waiver from the required 48-hour public notice of a public hearing on the floor today 3/3.