Why is it that we demand excellence in sports but not in public administration?


“
Simply put, local maintenance officials need to do a better job (or in some cases, any job) extending the life of roads by treating them regularly with rubberlike sealants — materials that other places have used for more than 40 years, the experts say.—Star-Advertiser, Oahu behind the times, road repair experts say, 2/8/2016
”

Over and over again we’ve heard cries to immediately replace this coach or that athletic administrator—as soon as we felt they weren’t doing the job for us.

So how come, when it comes to city or state government, we accept mediocrity or outright incompetence with nary a complaint?

As regular readers may know, Disappeared News has been pounding on the issue of neglected pavements in Honolulu for some time. First it was the fact that stormwater regularly floods and overwhelms our sewage system, due in part to the lack of permeable pavement or other approaches that allow runoff to drain directly into the ground. Yup, it can go right through a type of asphalt and not flow into streets and city stormwater drains. But we don’t use that well-developed technology.

Next it was disappearing road markings, which is a clear safety hazard, but to me is a marker for city indifference to the need for proper maintenance of our streets. 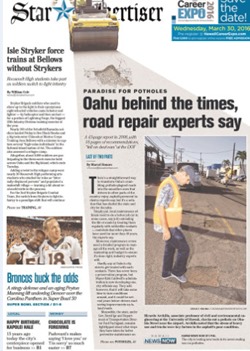 The pothole situation has been going on seemingly forever, with no end in sight. This brings us back to leadership incompetence. And so I was glad to see the fine article by Marcel Honore in yesterday’s paper.

The Star-Advertiser article could break the mold. Perhaps we’ll get some action at last on Honolulu’s indifference to the suffering of motorists. I’m skeptical, though, as long as we don’t replace the “coach” when we’ve been losing the game for so long.

Drivers and passengers have suffered jolts while commuting. They lose free time and suffer the expense of costly suspension repairs as a direct result of the City’s neglect of its duty to maintain our street and road infrastructure.

Nothing will happen soon, though, unless our typically passive population begins to take action. Unfortunately, that mold has  yet to be broken.

Just as with UH football, the problems begin at the top

We don’t blame the players when teams don’t deliver, we blame the coach or the athletic director. Then we demand that the non-performing personnel be fired and a better replacement hired. Sure, there’s a bit of whining about the cost, but at the same time there is a big push for better leadership.

With our city government, however, we allow the same failed management to continue year after year. The pull-quote at the top reveals that Honolulu has not put in place the technologies that other places have been using for 40 years. The story in yesterday’s paper reveals yet more incompetence: a report with 16 pages of recommendations not only did not lead to improvement, but now no one can even find a copy of it.

[I have emailed Larry Galehouse, who was quoted extensively in yesterday’s article, asking for a copy—he’s away from his office at least until tomorrow.]

“A lot of what we recommended fell on deaf ears,” Galehouse said. On subsequent trips he noticed that “by and large they didn’t do it,” he said.

When it comes to climate, Hawaii is no more disadvantaged in preserving roads than any other state — other regions cope with snow or searing heat, Galehouse said.

As someone who has lived outside of the country and visited many cities, I know that streets and roads can be kept in tip-top condition if there is a will to do so. I previously posted some pictures snipped from Google Earth that should make us very unhappy with our Department of Transportation leadership as well as the City Council that underfunds the department. Here’s one of a street in Singapore. 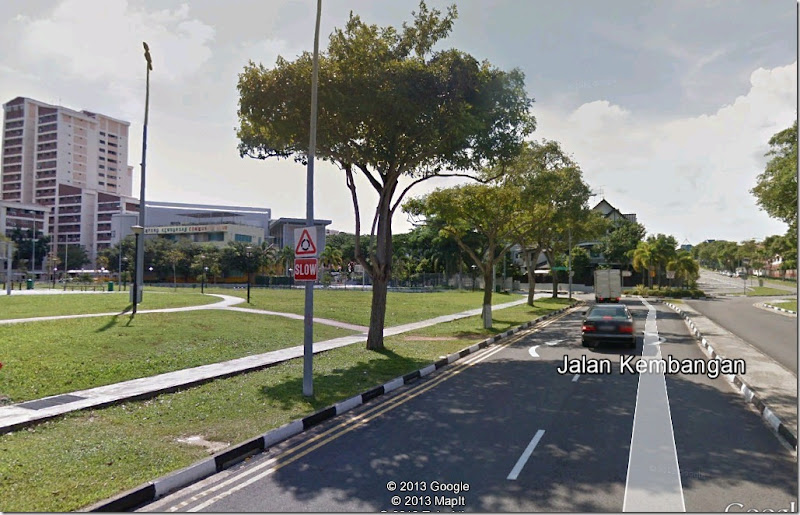 Aside from pristine pavement, note that white paint is used liberally to assure traffic safety—not only are lane dividers clean and bright wherever you “fly” over Singapore using Google Earth, but check out the curb markings at the left. (The heavy white line is part of Streetview, it’s not actually there on the street.)

At first we might be envious, but next we should demand the same of our city government. And if the “coaches” won’t do it, perhaps its time to replace them. 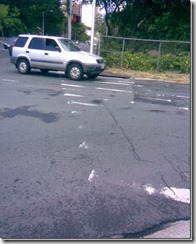 Let’s be clear that having clear street markings is not just a question of aesthetics or pride, it’s clearly a safety issue as well. When crosswalks are allowed to disappear people will be injured or killed. I’ve posted far worse photos than this one.

When highway repairs are done as incompetently as this… 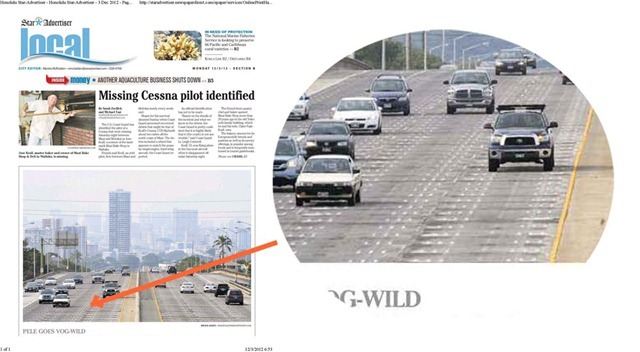 ,,, drivers and passengers are endangered when visibility is poor, such as in the rain with the sun shining ahead: 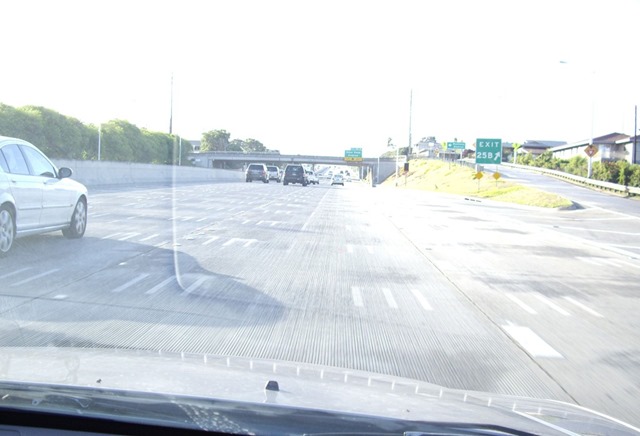 The extra white lines are a leftover from the surface repairs, and they’re still there today.

If it’s not one thing, it’s another

One doesn’t have to be an expert on pavement technology to know that Honolulu is woefully backward. Yesterday’s article states this explicitly. But it’s not just pavement technology—other news articles have reported (for example) that the DOE still does substitute teacher payroll on 5 x 8 inch cards (!). The state’s IT systems are hopelessly antiquated. Those in charge of street lights don’t understand how to focus light on the roadway instead of the sky and don’t understand the importance of choosing the correct color temperature.

None of this is rocket science.

I’ve suggested that we could use someone in government who would fill the role of “chief technologist,” monitoring what the state and city are doing and advising on the most modern and cost-effective techniques. GE had such a position when I worked there.

Keeping our government’s technology up-to-date should pay off for taxpayers. I’m also tired of defending Hawaii as a third-world country, even though in many respects the critics are correct.

Let’s break the mold. I submit that we the people need to find the right “coach” and fund the team properly. In other words, take a long, hard look at our public administration and fix its deficiencies.