“
I imagine you already know that I am much more socialistic in my economic theory than capitalistic. And yet I am not so opposed to capitalism that I have failed to see its relative merits. It started out with a noble and high motive, viz, to block the trade monopolies of nobles, but like most human systems, it falls victim to the very thing it was revolting against. So today capitalism has outlived its usefulness. It has brought about a system that takes necessities from the masses to give luxuries to the classes.—Martin Luther King, in a  1952 letter to Coretta Scott (see The Intercept, 1/18/2016)
”

Bernie Sanders has been snubbed by the commercial media—no doubt because a “democratic socialist” does not fit well in pages that are devoted to promoting the thinking of Cal Thomas, Charles Krauthammer, and their right-wing ilk. So it was predictable that our own daily paper, the Star-Advertiser, would all but ignore Sanders in reporting the Democratic debate.

Sanders did well, but today’s news coverage was pre-ordained: It would be all about Clinton, of course. 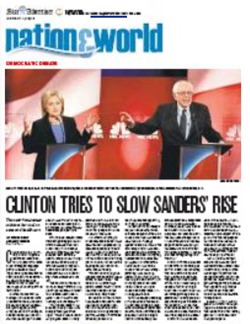 And so it was. The story reporting the debate on page A3 of the January 18 print edition was about Clinton: Clinton’s strategy, the threat Sanders poses to Clinton, and so on.

At least the story mentions Sanders, though it is not about  him.

Our local paper is not alone in ignoring Sanders. Trump seems to get his share of stories and then some, even when Sanders leads Trump in polls: 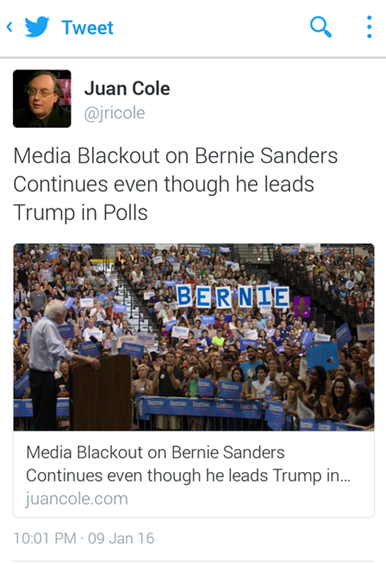 Speaking of Trump, we don’t often get any real analysis of how these candidates are doing in the eyes of voters, much less where they stand on issues that are important to us. Nate Silver posted this analysis of the Republican candidates’ perception in the eyes of the public that shows that Trump is the least popular, taking into account not just those who like him but also those who dislike him (data: Huffington Post via FiveThirtyEight). 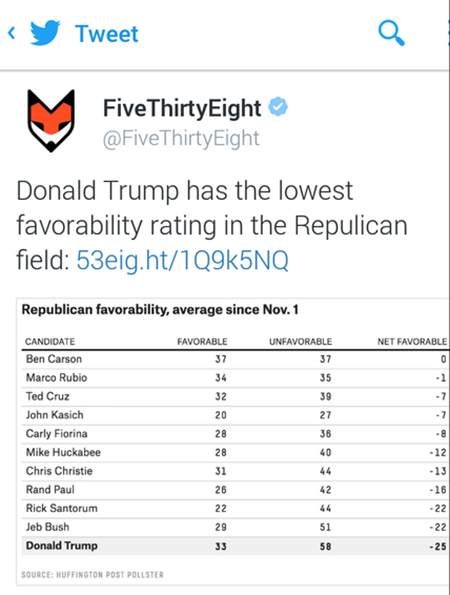 Trump is such a great gift to newspapers that I don’t blame them for covering him. Also, he represents a break from the other Republican candidates who currently hold elected office and so are beholden to their corporate sponsors. In that, he is like… Bernie Sanders. 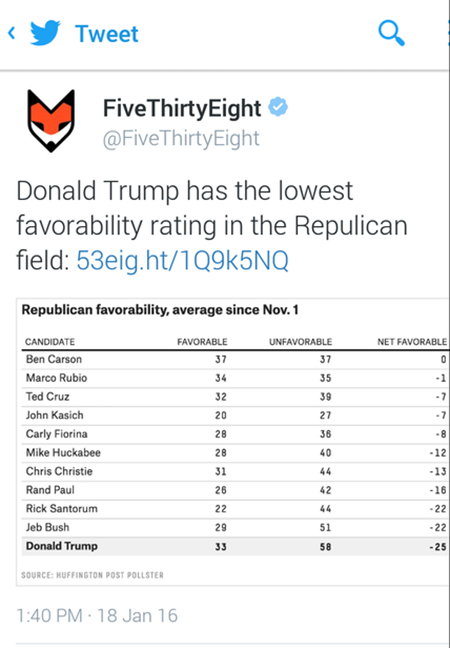 Sanders just doesn’t fit the ideology that drives a newspaper whose constituents (advertisers) are so heavily biased towards development and retail. Yes, we pay subscription fees, but we don’t get to vote on coverage or content.

To these editors, democratic socialism represents a threat, something that will spoil their party.

As long as today is Martin Luther King Day, let’s close with one more quote:

Do you think that our newspaper would go beyond the “dream” to bring you this aspect of King’s advocacy? Of course not.