New Year’s resolution: to read more Kafka, or just go to the beach?

Who am I kidding? It’s 2016. I have read no Kafka in a long time and I’m not likely to read any more no matter how firmly I resolve. 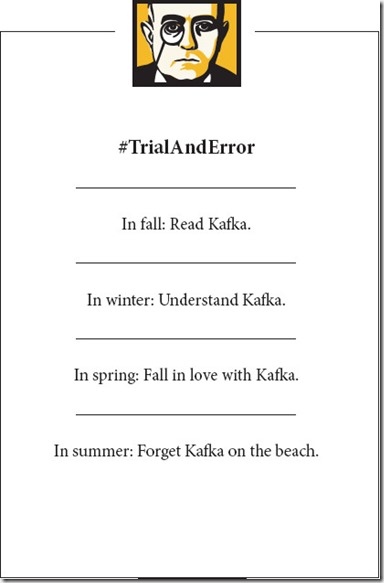 (from Nein. A Manifesto by Eric Jarosinski)

I read some Kafka in high school, resolved to study him in college but didn’t, then figured I’d have time after moving on to industry and settling down.

I found my place in industry, but that left no time for Kafka.

So I thought I’d have some time to catch up on the beach in Hawaii.

That didn’t work.
Another thing I’ve given up on is getting a better understanding of bicomplex holomorphic functions.

Even while studying that stuff in college I knew that I would never use it. Ever. Not even once, in later life. Heck, I haven’t much use for the eleven times table, much less for holomorphic functions, bicomplex or not.

I’ve learned that most likely Hawaii isn’t a place where people read Kafka on the beach. Sure, one could, but it probably doesn’t happen much.

This place sorts people out.

And that has consequences. The sort of people who read much Kafka are likely to stay in Berkeley, or can be found in cold places where one can cozy up to the fireplace with a copy of Die Verwandlung ("The Metamorphosis") in the original German. For studying Kafka, there are places better suited to it than here. Nor does studying Kafka lead to a job capable of paying the high cost of living here.

Our young college graduates will need to leave Hawaii to continue their studies or to find work, because there is no place here for our top engineering graduates (as an example) to fit in. Opportunities are much better elsewhere. And it’s too bad, but it’s true.

But I was warned about that before we moved here. Why Hawaii??

If I wanted to continue my career as an executive with GE, it would be a dead end. One could have career advancement or surf, but not both.

There is life after GE in fact. But it’s very different. I did not find the people around me that I was used to. Competent business leaders, crack programmers, planning specialists, strategic planners.

But who cares. I can say that now. This is not Silicon Valley nor Wall Street nor Redmond, Washington. It is what it is, and it is a great place to live, even if family on the mainland believe we’re wasting away our life on the beach. People do live and work here, it’s not just for tourists.

Unfortunately, this means that we’re a bit short of competent business leaders, crack programmers, planning specialists or strategic planners. They mostly have better sense than to come to Hawaii.

And it shows, in newspaper articles documenting cost overruns, incompetent government planning, and absurd IT failures.

So for 2016, perhaps a good New Year’s resolution for me would go something like this: eat more sashimi, get to the beach, and also try and keep Hawaii Hawaii. Be useful. Write some letters to the editor (see today’s paper: I’m actually carrying out my resolution!) and do what I feel needs doing.