The ACLU motion for a temporary restraining order against the City has documented for the court what this and other on-line sources have long reported: Honolulu’s actions against its homeless citizens amount to cruel exploitation rather than “compassionate disruption,” Mayor Kirk Caldwell’s favorite euphemism for his administration’s vendetta against those forced to live on the streets.

The motion is specifically aimed at halting the wanton seizure and destruction of personal property including ID and medicines.

One witness described, in her deposition, the nighttime terror raids staged against sleeping homeless people as City workers, along with the 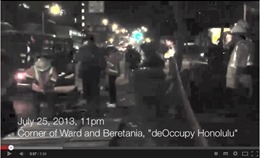 Honolulu Police Department, went around “waking people up in the middle of the night, and destroying property they owned.”

The HPD has employed the same “terror tactics” that US special forces were hated for in Iraq and Afghanistan—the dead-of-night raid.

Caldwell cannot say he is unaware of these unconstitutional and malicious night raids—his own appointee, Jun Yang, Executive Director for the Office of Housing, has been caught on video attending night raids. See, for example: On the sidewalk with Jun Yang, Honolulu Office of Housing (7/25/13 raid), posted on YouTube by Doug Matsuoka.

Most raids, day or night, remain undocumented. When police come by at 3 or 4 in the morning with lights, garbage trucks and undoubtedly much noise, the only thing to think about is survival and preserving what one can of essential possessions. There’s no opportunity to find and use a camera while one’s stuff is being carted off.

Compounding Caldwell’s cruelty, city workers often seize possessions without consideration of the danger or damage they are causing. An example from the ACLU document:

For example, the City took bedding, a cart,and a backpack containing heart medication from a 75-year-old man. The City refused to allow him to keep it.

The ACLU argues that the City is violating its own ordinances by destroying, rather than storing, personal property. Again, aside from the evidence presented to the court along with this motion, the City’s actions have been very well documented in articles posted on the Web. For example, what storage did the City provide for medicines, including colostomy bags, during a raid on Piano Park? A garbage truck.

Yes, that’s a garbage truck below, parked on S. King Street during a raid at 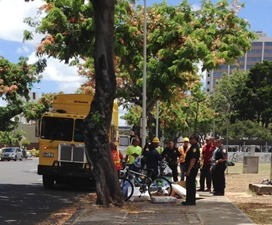 the spot near “Piano Park” where the colostomy bags were taken. Others reported seizure and destruction of personal possessions including ID and medicines. No due process, just seize and dump.
One possible outcome of a successful decision in federal court is that the City would be enjoined against destroying personal property without due process (of course, a judge could decide something else). If the City cannot destroy personal property as it routinely does now, it would either have to cut back on the raids or greatly expand its capacity for bin storage.

Meanwhile, the main trial will proceed, regardless of the outcome of this motion.

Mahalo for keeping the light on this issue. This has been going on for years and years and years. I've gotta find the video I have of a tent being crunched in the back of a garbage truck while the its owner repeatedly asks for them to stop.