Knock knock.Who’s there? Your accountant, and it’s time for the company to leave Hawaii

Instead of growing a high-tech economy with living-wage jobs, Hawaii taxpayers, due to the ineptitude of its lawmakers, have ended up perpetually subsidizing businesses that may not be viable here without taxpayer support.

Tax credits do work to incentivize startup businesses—many states use them successfully. But they cannot be forever if there is no measurable and reasonable return, usually counted in permanent jobs.

Tax incentives mean that the rest of us are subsidizing these companies and not funding infrastructure, for example.

But perhaps our state legislators are easily fooled. The jobs most often never materialize or may be created on the Continent, as in the case of Hoku Scientific, which manufactured its solar arrays in Idaho, not in Hawaii.

We are talking real money here:

Hawaii’s high-technology tax credits have cost the state an estimated $1 billion in lost tax revenue since 1999, according to an audit of the state Department of Taxation’s administrative oversight of high-technology business investment and research activities tax credits.

When the state Legislature decided in 1999 to support the growth and development of high-technology industries in the state by way of tax credits, it gave up its appropriation power and oversight over what would become significant tax expenditures, according to the audit released by the State Auditor’s office Tuesday.

The audit also noted that the state will never know the extent of its success, lacking the information needed to measure its effectiveness.

That was 2012. Just this month a more scathing audit was released:

Special state tax credits lawmakers approved almost 15 years ago to spur growth in Hawaii’s technology sector could eventually cost the state up to $1.7 billion in lost tax collections, or more than twice the amount the state previously estimated, according to the Hawaii state auditor.

The auditor’s office also contends that even as businesses continue to claim the tax breaks, state lawmakers have “not been provided a true picture of the costs and benefits” of the high-tech tax credit and other credits.

The auditor’s office has argued since 2012 that the hightech tax credit law was passed without any goals or performance measures, therefore the state has no accurate way to measure whether the credit helped to grow high-tech industries in Hawaii.

It has also been argued that for high-tech to succeed here we need more venture capital investment. While VC is an essential player in tech startups, the investors don’t care if the firm stays here or not. They simply want a return on their investment. Get used to it. VC investment also won’t make Hawaii into a “high-tech hub of the Pacific”, a phrase I’m glad is no longer used much.

What we have perhaps is a persistent confusion between starting businesses and creating jobs. Tax incentives and other proposals can help business start. But then they leave when the incentives are no long enough.

That bean counter will come knocking one day. Whether publicly or privately funded, if the bean counter says “go,” they go.

Also, expensive pipe-dreams amount to playing loose with taxpayer money (yours and imine). There is no High Tech Park, the stock exchange did not materialize, we are not a communications hub of the Pacific (or at least, it doesn’t matter at all if we are), and what are the chances that hundreds of thousands of dollars (at least) thrown at a spaceport will ever bring a return?

“While 80/80 is an ambitious goal, by collaborating with entrepreneurs, the business community and government, we can diversify our economy and build Hawaii’s reputation as a good place to do business,” Melton said in a statement at the time.

Why am I skeptical?

No joke, I’ve been writing about the futility of spending large gobs of taxpayer money developing high-tech jobs in Hawaii since at least 2006.

It’s not that there can’t be high-tech jobs in Hawaii (we already have them), but that we’re simply in the wrong place, so that at some point it makes sense that a company not be here. So does it make sense to subsidize companies that will ultimately hire people in other states, not in Hawaii? 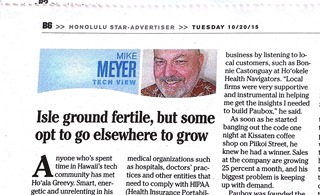 This morning’s Tech View column in the Star-Advertiser is a perfect illustration of what typically (not occasionally) happens to startups and established tech companies alike when they realize that they can’t grow here, or their market or suppliers are elsewhere.

No matter how much the CEO likes living in Hawaii, or even when the startup makes sense, there comes a time when greener pastures elsewhere beckon irresistibly. Not always: we do have tech firms that stay here, but as a rule, if a company wants to grow and its talent, markets or suppliers are elsewhere, then it will go. Fact.

It is also hard to imagine that sinking more big bucks into high-tech without a realistic appraisal of return on investment makes any sense.

The state’s High Technology Development Corporation lists several objectives on its website. The last in their list is:

Build Hawaii’s reputation as the perfect place to do business

Hawaii is a perfect place if your business is renting surfboards to tourists, but as the entrepreneur in today’s Tech View column determined, not for his tech company. He moved his offices to California.

“While I had local customers,” [Ho‘ala Greevy] said, “I needed to get in front of the big players and be in a place where there were lots of potential customers. I also had to have access to capital and talent. For both of those components, you can’t be anywhere better than the Bay Area.”

Greevy has five employees and is certain he can find qualified workers if he needs to add more of them. His business has grown to encompass customers in 26 states plus Guam. He is convinced the current rate of growth couldn’t be sustained just with Hawaii customers.

One after another, from VeriFone to Hoku Scientific, a recent Star-Advertiser darling, high-tech firms grow and create jobs elsewhere or move out entirely.

No matter how much taxpayer money our state plows into business development, we cannot escape the reality of our location in the middle of the Pacific Ocean. We cannot tow Oahu off to San Francisco Bay. We’re here and we need to get used to it.

That means we’re far from talent, markets, suppliers, and synergistic relationships with other high- and medium-tech companies (someone needs to make the PC boards or stock the MIL-spec stainless-steel screws).

There were other intangibles the Bay Area had that made the move work. Perhaps the most important of those was his ability to sell his product more readily as a mainland company than a Hawaii company. “No question,” said Greevy, “potential customers took us more seriously when we told them we’re a startup based in San Francisco.”

Right. So why is HTDC still dreaming that it can “Build Hawaii’s reputation as the perfect place to do business” when that reputation doesn’t even exist?

Imagine if the lost $1.7 billion of tax incentives(see box at right) could have been spent on truly affordable housing (at 40% max of area median income, not the 80%, 120% or 140% our newspaper likes to define as “affordable”).

We need to hold our legislators accountable. If they are truly concerned about the economy, they could enact a living wage, which for Hawaii would trend towards $25 an hour, not the mere $10 that will happen too late anyway.

Now, some part of that tax credit may have worked. The problem is, as the auditor pointed out, we just don’t know.

To play so fast and loose with taxpayer money is incompetence. Unfortunately, the only remedy is to install competence in the Legislature, which voters have not chosen to do.

Fiscal accountability and economic health can become part of good public policy. To do that will take first of all a more informed and involved electorate.

We cannot tow Oahu off to San Francisco Bay? I thought we're just off Baja California, right next to Alaska! ;-D