“
In a 4 to 2 vote (CM Chock was absent), a majority of the Kauai County Council changed its own internal rules to prevent any Councilmember from asking questions of the public when they testify.  If Chair Mel Rapozo permits, Councilmembers may ask testifiers to repeat or restate their position, but no questions pertaining to the substance of the testimony shall be permitted from this day forward.—Kaui County Councilmember Gary Hooser
” 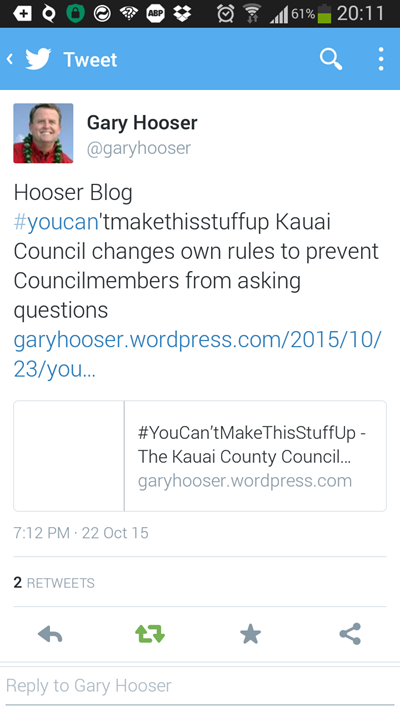 The Kauai County Council can be amazing at times.

For example, in 2013 they led the rest of the country by passing legislation to protect citizens of Kauai against the harmful effects of pesticide use on the island:

The Kauai County Council voted 6-1 to approve an amended bill that calls for mandatory disclosure of pesticides use and genetically modified crops by large agribusinesses on the island.
…
The bill requires disclosure of pesticides and GMOs by large agri-businesses. It also calls to implement buffer zones near schools, dwellings, medical facilities, public roadways and waterways. It takes effect in nine months.

Yes, that’s right, in a 4 to 2 vote (CM Chock was absent), a majority of the Kauai County Council changed its own internal rules to prevent any Councilmember from asking questions of the public when they testify.  If Chair Mel Rapozo permits, Councilmembers may ask testifiers to repeat or restate their position, but no questions pertaining to the substance of the testimony shall be permitted from this day forward.
…
For the record, no one testified in support of the measure and the handful of testimony that was presented from the public all opposed the Resolution and resulting Rule changes.

In our system of government, lawmakers are self-selected from among the general populace. They need bring no special expertise to their office. This means they depend on others to guide their decisionmaking.

So look what the Kauai County Council has done: they’ve handicapped their ability to make sound decisions.

Even in the Confucian era in China, when Chinese officials were selected from a small group of highly educated scholars, these officials understood that they needed to consult others in order to lead effectively. For example this, from the Wikipedia:

The district magistrate, who by regulation was not allowed to serve in his home district, depended on local gentry for advice and for carrying out projects, giving them power to benefit themselves and their clients.

Gary Hooser indicated that the Kauai County Council passed this new retrograde rule change despite universal testimony against it. [Correction: per comment below, there was one testifier in favor.]

One wonders either what they were smoking, or whether they passed Civics 101 in school when they were little.

Unfortunately, since this is not ancient China and we don’t expect our leaders to even be educated, much less pass examinations before taking office, we have to expect behavior like this from some of them.

Finally, I need to say that I’m not completely surprised. Someplace on a hard disk yanked out of a now-dead computer I have an old video which appears to show Kauai Council members debating whether they will follow the Sunshine Law or not. That’s right, debating whether they’ll break a law. On video. So go figure.

Thank you Larry for posting this. I did make one correction on the blog which has now been updated and correctly notes that one person did mention in their testimony that they "supported the change". The new corrected blog paragraph is as follows: "Only one person testified in support of the Rule change of the 4 persons from the public who were present and offered testimony. 2 others opposed the measure and another individual was non committal. (Note: The original version of this blog incorrectly stated that no one testified in support of the measure.)" I inadvertently missed including this fellows comment as it was added to his statement at the end of his remarks which primarily had focused on other aspects of the rules (written comment section) and had not been focused on the changes proposed. gh