“
…
I'm going back to Honolulu
To the island girl with flowers in her hair
If she`s waiting I will hold her close and never stray
From Honolulu, in Hawai`i nei--I Fell In Love With Honolulu - Donald Neil McKay
”

The tourism industry depends to a large extent not only on the attraction of warm tropical breezes and welcoming surf, but on a carefully nurtured image of Hawaii as a peaceful paradise where love reigns eternal.

Tourists seldom meet Native Hawaiians except in entertainment settings. Those who know anything at all about Hawaiian history may know about the overthrow but not even that it was illegal. They may think “all that” is well behind us now. Far from it. But they come in ignorance and leave in ignorance.

That’s why I suggested that demonstrations in Waikiki that defy that image could be “the nuclear option.”

Hotel owners and tour operators do not want to see Native Hawaiians and supporters marching in the streets exposing the tourists to reality. 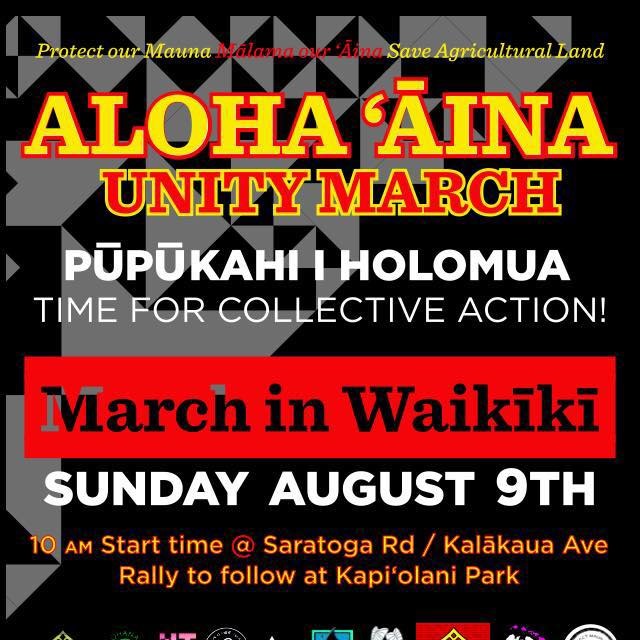 Today’s march at 10 a.m. starting in Waikiki will introduce some tourists and visitors to another aspect of Hawaii, one that they have been shielded from.

It’s a single event, so probably isn’t of “nuclear” strength. But if repeated, tourists will indeed be educated. That is not the education the tourist industry wants. So repeated marches could have a powerful effect.

Bringing the issue of desecration of sacred places to the attention of tourists could be a way to apply counter-pressure to the otherwise overwhelming power of government. There’s nothing illegal or even immoral about educating the masses.

This could be a tactic that levels the playing field.

Update: I know it’s not good to feed the trolls, but I would like to respond to one of them.

No, I am not suggesting hurting the tourism industry. It would never come to that. First of all, this is only a single demonstration. If there were repeats and they were having an effect, someone would take the governor aside and tell him what he can do with his 30-meter telescope.