Some of the energy sector has reacted in shock or perhaps anger at Governor Ige’s announcement that he will not support importation of liquid natural gas (LNG) to substitute for other fossil fuels. The Governor would prefer to invest directly in projects that will make use of renewable energy sources.

For this, he has been accused of being dictatorial, and much else.

But could Ige be right? I would accuse him of being an engineer who understands that the Europeans have successfully done exactly what he is proposing and their grids already deliver power more reliably than does the United States—and with far higher levels of renewal power.

The European grid demonstrated its stability in March as a solar eclipse took out multi-gigawatts of solar power without effect.

Germany’s advances in provision of reliable power based heavily on renewables is a product of good engineering, not political wrangling in the absence of good design, which is where Hawaii appears to be stuck.

Both the article A Dictatorial Pronouncement (Energy Dynamics, 8/25/2015) by Mina Morita and the document she cites seem to be mired in the concept that a power grid cannot do without fossil-fuel based generation to stabilize and offset variable solar and wind generation, and that LNG is a more cost effective method of providing that backup and regulation.

Grid stability requires that voltage and frequency be strictly maintained. But there are a variety of technologies, old and new, that provide

stability. Often that is done with spinning devices called synchronous condensers or with semiconductor thyristor devices. A recent article in IEEE Spectrum magazine describes how old-fashioned coal generating equipment can be repurposed to stabilize the grid, an interesting trick.

Interestingly, modern wind turbines have been designed to provide the same function. Rooftop solar installations can also be controlled to provide grid stability, and soon may be upgradeable to provide the same functions as spinning synchronous condensers. And guess what: those rooftop installations are providing grid regulation right now, on Oahu! See 800,000 Microinverters Remotely Retrofitted on Oahu—in One Day (IEEE Spectrum, 2/5/2015). 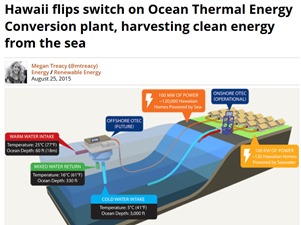 There are renewable energy sources that are as continuous as fossil-fuel power plants. One, Ocean Thermal Energy Conversion, is well on its way to becoming practical. Hawaii just plugged in the first fully closed-cycle Ocean Thermal Energy Conversion (OTEC) plant in the US. This plant uses temperature differences in the ocean to generate electricity. Geothermal power is also continuous.

These sources are not here yet, but engineers (rather than regulators) are potentially equipped to estimate when (or if?) these technologies might make significant contributions, and what level of investment is necessary to reach that goal.

Oahu can also utilize stored hydro power. Water pumped into Lake Wilson, for example, during sunny days, can be run through turbines to generate power at night.

Other storage technologies are making advances.

Eventually there may be wave power. I wonder why we don’t have it already, but don’t want to leave it out.

What I would like to see is evidence that the proper engineering calculations are being done to assure that anything we do, whether LNG substitution or greater emphasis on renewable sources, is affordable. Hawaii ratepayers have been paying about three times the national average without much complaint, but the cost is hurting our economy as more people are driven into poverty by the combination of energy, housing, food and other costs of living.

What we could use is a timeline of how we are to get to the state’s renewable energy goals.

As to Governor Ige’s “dictatorial pronouncement,” he may basing his decisions on sound science that is already proven elsewhere. He may be right. Get used to it.