Why not a design contest to create a proper city flag for Honolulu?

Yesterday, with tongue partly in cheek and with the UH study on Honolulu’s homeless population in mind, I suggested that it’s about time that Honolulu’s flag was redesigned. Flag experts (we’ll get to them in a moment) hold that a seal, which is what we have now, is a really bad thing to put on a flag. My suggestion, a flag with a predator bird, was not really serious and would also be a bad design.

I suggested that designing a new flag could be the subject of a contest. 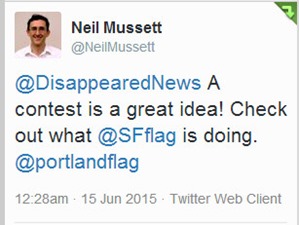 I did follow the tweets suggested, and learned quite a bit. One of them linked to the video below.

As you watch this video of a TED talk by Roman Mars, and I hope you will, notice that Honolulu’s city flag is on one of his slides of selected flags that suck. The slide is at about 9:47 in the video along the right edge, one of the many he described as S.O.B.s, or “seals on a bed sheet.”

Please watch the video. It’s a pleasure to watch Roman Mars in action as he creates a podcast right there on stage.

Click on the thingy at the lower right for full-screen, it looks really great blown up, and you’ll need the size to see some of the flags.

Honolulu’s flag really is a terrible design. Really bad. The design principals recommended are, according to the North American Vexillological Association:

3. Use two to three basic colors

4. No lettering or seals of any kind.

For some reason, cities of the United States seem to have a lot of trouble with principle #4.

There are lots of resources at the North American Vexillological Association website, which you’ll be relieved to learn is a very simple NAVA.org.

So I wonder if there is any interest at all in designing a real city flag for Honolulu? One that we can be proud to see flying all over the city.