Why can't transit fares be predicted before a project is approved?


Neither the city of Honolulu nor the state has shown much aptitude for basic planning when it comes to transportation. It's not just the massive cost overruns vs. promised fiscal responsibility of the Honolulu rail project. It's also the lack of planning and allocation of funds for maintenance or repair of roads, the Handi-Van, etc.

The HART cost overruns for our super-expensive rail project have been well-documented in the press, and there's a lingering smell of smoke wafting over that--we sniff it and wonder if there have been fraudulent claims by those responsible. Suspicions may only be run down if the rail project is thoroughly and fully audited. Where there's smoke, we need to check for a fire.

On the other hand, planning does not seem to be a strong suit of government at either the state or city level, at least with regard to transportation.

Can you imagine proposing and then implementing a transit service which, for each $2 fare, would require a $120 subsidy? No one would do that. Well, under Mayor Mufi Hannemann, Honolulu did exactly that. And it let TheBoat, as it was called, run for two years.

TheBoat should never have left the drawing board, much less a dock. But it did.

For nearly two years, TheBoat has been a little-used leg of Oahu's TheBus system, three 75-foot double-hulled vessels running six round trips daily, sailing between the Aloha Tower Marketplace and the growing communities of West Oahu.

TheBoat utilized vessels whose running cost was (or should have been) well known. They had been in service elsewhere.

But TheBoat was not the only instance of poor planning.

The state legislature and Governor Lingle were big champions of the Superferry. They bypassed laws designed to protect our environment, ultimately leading to a court order to halt the ferry runs. As with TheBoat, there seems to have been little or no attention paid to operating costs vs. fares.

This blog posted several articles over the lifetime of the Superferry, soliciting outsider estimates of what it might cost to run those huge, fuel-hungry ships. Of course, since the Superferry was run by a private corporation, there was no way to check the accuracy of those estimates, but they weren't made out of the blue--there was information about the ship's engines and design that made reasonable guesses possible. And what the estimates showed was that the Superferry was likely losing money since it sailed without imposing the fuel surcharge it needed to and at the fares it was charging passengers.

Ultimately, what stopped the Superferry was bankruptcy. With the exception of a few months in its operation, it may not have shown a profit, by those outside estimates.

Why could similar (and very basic) estimates not have been done in advance, by the state government? Well, 'cause they don't work that way. The smell of smoke wafting over the Superferry all along was a question of whether it was running in Hawaii at a loss simply to prove the seaworthiness of the ships in the hopes of landing military contracts later. The state chose to ignore the smoke, so it got burned later for its investment in infrastructure.

One more, though minor example: Lingle's other transportation folly--a promise of local production of 10,000 electric cars per year in Hawaii that she swallowed hook, line and sinker. Oops... a little too late with that metaphor. 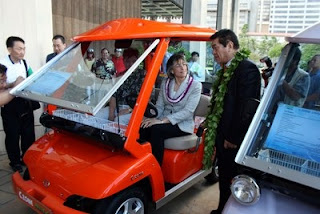 Showing an amazing lack of fiscal foresight, former Governor Linda Lingle bought a Korean company's promise of a huge commitment to local production and utilization of these funny little electric vehicles. To be sure, she was not the only government leader taken in by the unlikely plans. At least, the only paper reportedly signed was an MOU, no contracts were involved in this particular fiasco.

A simple Google search alone would have provided sufficient facts to raise doubt, but certainly a knock on the door of the state's bean counters could have ended this embarrassment before it even started.

So we don't do well with transportation projects.

Yet planning methods are available to cost out, or at least to estimate, the most difficult municipal plans or projects.

It's 2015 already. Why is this rail project proceeding without knowing projected operating costs and fares?
A related question, because construction of rail is supposed to bring with it extensive housing development: what additional infrastructure costs will Honolulu have to bear as a result of the great increase in cars that rampant development along the rail route will bring with it?

The Mayor continues to joke--at least I assume he can't be serious--that rail will reduce traffic. As long as the number of parking spaces in town and in Waikiki or at UH remain unchanged, not one single car will be removed from the road by rail. Simple math. One parking space=one car in town=one car on the road.

But Caldwell isn't alone. Speaker Souki has said he supports rail because it will reduce traffic. Maybe it's a matter of faith, of belief, or maybe even of prayer. Here's an archetypal prayer for transportation:

Does the city know how to plan transportation properly? Does the state? Do they believe that taxpayers will fund anything at all (alas, they may be correct...)?

So somebody please run the numbers on this rail monster so that we can learn the running costs, at least what they look like at this point in the project. We're entitled to know what will be snitched from our pockets or purses each night in taxes to pay for operating rail.

We can push for the information, or just pay later. Our choice.