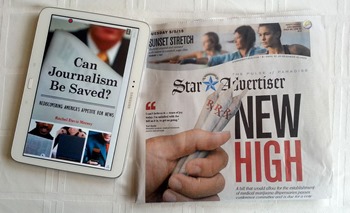 What does it mean? What will the story be about?

Can journalism in Hawaii be saved?
I don’t mean “can newspapers in Hawaii be saved,” they’re probably doing just fine economically at the moment. Nor do I mean that reporters cannot report. But those headlines… and the meaningless if not misleading graphics that seem to be used to fill space… why?

Today’s headline may be a new low in the sense that it is neither informative nor accurate, and the graphic isn’t especially attractive (although that’s obviously a subjective judgment). It misleads. The story has nothing to do with getting high, or any other high, for that matter.

The story reports that there is a bill (not yet even a law, nor yet finished with the legislative process) that would establish a small number of medical marijuana dispensaries across the state. The bill is important to users of medical marijuana—who are in pain, or suffering nausea or other symptoms which medical marijuana can alleviate. This is very different from “getting high.”

Hawaii has had a medical marijuana law on the books for some time, but inexplicably, if a patient cannot grow the stuff at home, usually there is no recourse but to buy it on the street, under less-than-legal conditions.

The editors know this, of course.

What is a headline for?

These days, primarily on the Internet, headlines are no longer used strictly to inform. Sometimes they tease, making you want to click on a link to find out what the story is about. Newspapers sometimes use teasers, but not on an important story.

Sometimes a headline is in the form of a question:

“What Are We Doing to Fix Hawaii’s Homeless Crisis? (Honolulu Magazine)

In this form, we expect a discussion in some depth, although the story could just highlight a failing, for example. In other words, we have expectations that are formed by the headline.

I don’t have to go far for more examples. Here’s a snip from yesterday: 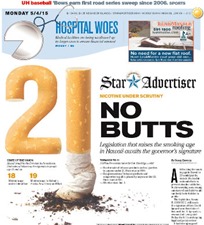 The headline may raise someone’s curiosity. The graphic is unrelated to the story (it’s meaningless unless you already know the story) and sure takes up a lot of real estate.

Or is that the point of it?
One last example, from three days ago: 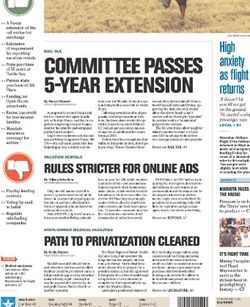 Maybe better, but no prize. As with many front-page headlines in this paper, you’d have to know what the story was about to understand the headline.

5-year extension? Of what?

The second one is close.

But the third—what is being privatized?

If there’s enough space for gigantic graphics, surely space could be given to run meaningful headlines?
By way of comparison, here’s today’s top story on the Civil Beat website:

The headline tells the reader exactly what the story is about, is dramatic (“shakeup”) enough to encourage reading, and the graphics, photos of the incoming and outgoing Senate presidents, are useful and directly related to the core of the story. Both leaders look determined, if I may give my impression. Say what you will about the photo selected for Kim, but who knows, it may accurately reflect her mood at this point.

Civil Beat has done a fine job with the story, which then deserves a good headline and top billing on the website. So that’s what they did with it.

There are headlines in the Star-Advertiser that are perfectly good, or close. They can do it if they try. Maybe it takes some practice.

Enuf. I wanted to say a bit about the use of graphics in general, but enough for now. The newspaper is really important to its readers, and I include myself. It is also something we pay for. So wishing it could improve is fair, I think.