I was wondering where to begin a post on overuse of graphics as opposed to doing a good job with the news. Then today’s Star-Advertiser was plopped at my door early this morning. Why not begin with today’s paper.

This will be a rant. You are warned. I’ll vent my spleen first, but I also have some examples of good uses of graphics to follow. Even if you skim the criticism, do have a look at those, below.

Looking at the paper, I feel like Jon Stewart must when he arrives at the office to see what gifts Fox “News” has given his writers that day.

But first, as Stewart says at the start of each Daily Show: The best gift I was given in this regard was one day in September, 2012. 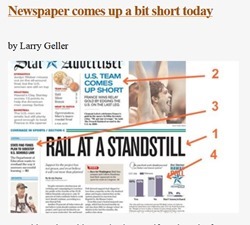 On that day there were questionable headlines and graphics with backwards time lines. Click over to that article if you’re interested.Back to today’s gift. I snapped two pages with the cell phone camera that inspired me. 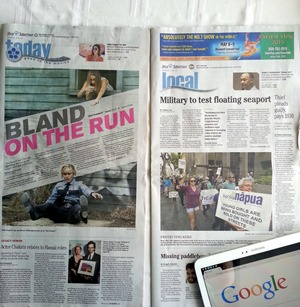 The movie page is a bit of a quibble, so let’s start first with local news.

There’s a large picture on the local news page of a march through downtown Honolulu yesterday. A man is shown holding a sign reading “Young girls are being bought and sold on these streets.”

So where is the story? Is it the job of a newspaper to send me to Google to find out what that sign means, what is the organization, and what do they want us to do? Why not run a smaller picture and a story on the subject? Maybe the subject is important—maybe the organization is reaching out to solve a social problem we, as readers and subscribers, should be told about. [Hint to the editors: it’s not too late. Find a reporter, or google it yourself. Make amends. Give us the news.]

This could be an example of the “Cosmetic decoration” that “will never salvage an underlying lack of content” that Edward Tufte was talking about, though he really meant data (as in numerical data perhaps). I’ll get to data illustration in a moment.

Another hint to the editors: Don’t waste the space you have. Civil Beat is rolling over you on local news that matters to readers. You can check on that after you google the story on girls being bought and sold.

As to the movie review attached to a giant picture, I know it’s a thing. And it’s a feature story, not news. But still. What a great example of graphic excess—that is, running as big a graphic as possible, which of course displaces news or feature stories that could have occupied that space.

That giant image is for a movie that was panned in almost every paragraph. In other words, a loser was given champion treatment. The last paragraph inside begins “The best you can say...”

All the review proves is that they could have chosen one or more better movies to review for that space—one that I might actually enjoy seeing. If there is one. But let me know, please.

Let’s get to news and data

I still love this page from April 23: 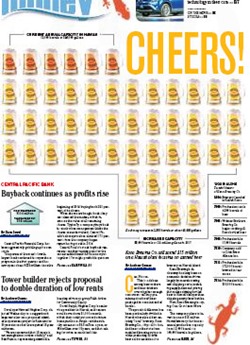 What is this story about? The graphic is an awful waste of space. It conveys  only two very simple data points.

What information does the graphic give? None. It’s overwhelming for the data it might convey. You need to read the print underneath to learn that they are talking about Kona Brewing’s plan to expand production from 12,000 barrels to 100,000 barrels a year. Even a simple little bar graph, though unnecessary, would give the eye an idea of the increase. Squishing cans on a page with the word Cheers! in the way says nothing and makes a quantitative comparison of the visual information impossible.

What’s wrong with this picture? 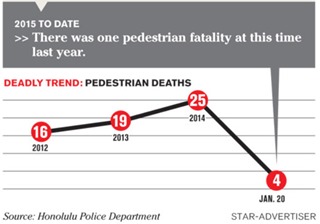 There are several things wrong. First, the data for the current year is shown in visual comparison to previous years even though this year is not complete. What the graph says is that there is a big drop. It’s not true.

Second, the graphic makes the classic error of having no scale on the Y axis. Without that, it makes no quantitative sense. The paper does the reader no favor by printing misleading graphics.

Edward Tufte is justifiably the guru on this subject. From his website, here is an example I am fond of:

Megan Jaegerman produced some of the best news graphics ever while working at The New York Times from 1990 to 1998. Her work is smart, finely detailed, elegant, witty, inventive, informative. A fierce researcher and reporter, she writes gracefully and precisely. Megan has the soul of a news reporter, who happens to use graphs, tables, and illustrations--as well as words--to explain the news. Her best work is the best work in news graphics. 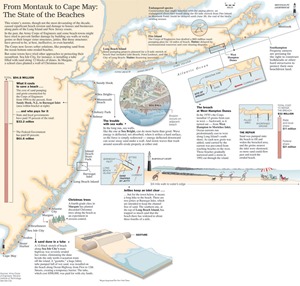 That article includes one graphic explaining the state of beaches in a certain area. This relates to our situation in Hawaii, where sand is being washed away, so I read it with interest. I don’t have permission to reproduce the graphic here, but you can see it, along with other fine examples of Megan Jaegerman’s work, by clicking on the link above.

This graphic shows that when the handle was removed from a pump, the number of cholera deaths in an epidemic decreased drastically. Good graphic, right? No. Here’s another, taken from the same data:

It’s the same data, but presented differently. It shows that deaths from cholera were already declining and continued to do so at the same rate even though the pump handle was removed.

So presentation can enlighten—if done properly. The second is an illustration of good graphic design that informs the reader. The first, if printed in a newspaper, would misinform.

When is a large graphic appropriate?

I think large graphics have to earn their keep.

I did like this one, an illustration from the New York Times that again, I don’t have permission to reproduce here, but you can click for it. It charts deaths in Iraq by number, type and region. After clicking, click again to enlarge.

Also, any of the graphics on the Megan Jaegerman page above would justify the real estate they occupy because they convey real information in exchange for the space.

With newspapers, there are certain styles. The New York Post front page most often 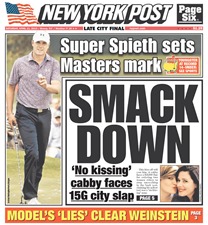 looks something like this, and the merits of taking that much space for so little have nothing to do with their choice to publish this way.

Our local newspaper has no competition, so has not had to resort to this sort of thing I suppose.
Instead, we are presented with large but partial-page graphics that often fail to contribute to a news purpose. In the left illustration below, my first take was that the story would be about building inspection, because that’s what the graphic shows. The graphics on the next two are unnecessary and do not contribute to the stories, which however are important. The demand for affordable rentals and lower-cost housing is real, but cute pictures don’t convey the challenge ahead.

Do these large graphics serve the same purpose as the New York Post’s splashy front pages? I don’t know. While the headline in the last illustration is accurate, the first two don’t convey information about their accompanying stories at all, so the reader is left with a puzzle until they inspect the page a bit more closely. The trick is to find those reading glasses and hunt for the smaller print. Graphics that convey information could help here.

If you’re still here with me, thank you. I always note that I do think newspapers are important to an informed public, and hope that saying these things somehow makes the newspaper better. Also, I think reporters could make good use of the space now occupied by oversize graphics. It’s their stories that I want to read, not pictures of a building being inspected magically from the bottom.