More homeless on streets—whaddya expect?? as we used to say in Brooklyn 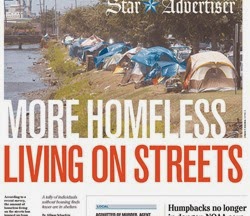 If you were a visitor to Hawaii today, you got quite an education when you picked up the daily paper waiting outside your hotel door. And no, I don’t mean “what a great place Honolulu is—even the homeless have a wonderful river view!”

You would read on the front page that

According to a recent survey, the amount [sic] of homeless living on the streets has jumped up from last year.
…
The overall count was 4,903, up 4 percent from 2014 and 34.7 percent from 2009, according to the draft report, which was obtained Monday by the Honolulu Star-Advertiser.

A frequent visitor might recall that former governor Neil Abercrombie appointed his first housing czar on January 20, 2011, more than four years ago (see: Ex-priest named state homeless czar, Star-Advertiser, 1/21/2011). In view of the story today, it would not be a surprise to the reader to learn that the state “housing czar” still has no budget.

Inside, on the continuation page, Colin Kippen, the current czar, did not mince his words:

We are moving in the wrong direction, but the numbers say a lot about our task at hand,” he said. “Criminalizing homeless people just moves them through the community. Not everyone will go into a shelter. We need to focus more on permanent housing. We’ve made a good start this year, but we need to ramp up these programs to scale.”

Kathy Xian, founder of the Pacific Alliance to Stop Slavery, agreed with Kippen but said more programs are needed for those who aren’t chronically homeless, especially seniors and youths.

So the city is moving in the wrong direction? If you read Disappeared News in addition to the paper,  you already knew this, but it is interesting to see the public clash between the state czar and the city.

Reading further, the visitor would read:

Marya Grambs, executive director of Mental Health America of Hawaii, said special emphasis also needs to be placed on serving Oahu’s mentally ill homeless population, which has experienced service and housing cutbacks. For instance, Grambs said, the Queen’s Medical Center cut beds in recent years, and the state Adult Mental Health Division has about half the beds that it did in 2009.

“Why so many unsheltered homeless? I think the chickens are coming home to roost. Too few hospital beds, residential programs and substance abuse treatment programs,” Grambs said. “Our community mental health system isn’t serving many who need help.”

There’s a lot in these two paragraphs. What Grambs is saying more or less directly, is that the actions of the state are contributing to the the increase in people living on the streets through cutbacks in adult mental health services.

What the visitor wouldn’t know

What the visitor wouldn’t know is how long Honolulu has done little to nothing effective to provide affordable housing and a housing first program (a “real” program) to help people move from the streets into permanent digs. The visitor wouldn’t know about the illegally-conducted raids that result in seizure and destruction of people’s ID, medications, and even kids’ schoolbooks.

But for Hawaii residents, the cutback in mental health services and its inevitable consequences will be no surprise to anyone following the issue.

In fact, cutbacks in services not only contribute to people ending up on the streets, the state’s cutbacks have increased avoidable deaths from all causes. Part of that is that life expectancy is greatly curtailed for anyone living on the streets. But there’s more:

A measureable and significant increase in avoidable deaths was reported in testimony given to informational briefing on state administration cutbacks in adult mental health services on Tuesday, March 16, 2010.

Here’s a video of sworn testimony that the legislature received on this issue back in 2010. Their action after receiving this report? No action.

Let’s be specific for a moment. Of the services that were cut, it was likely the abrupt cutoff of (ACT Assertive Community Treatment) that dumped people out of apartments or other housing and into the streets.

Colin Kippen, though budgetless, has a comprehensive understanding of the available remedies for homelessness. He understands the need for supportive services to be provided when needed. For example, he chaired a meeting of the Hawaii Interagency Council on Homelessness on February 12, 2014 at which Dr. Sam Tsemberis, founder of Pathways to Housing, described his program. Several of the slides illustrated ACT services. These team services are critical to supporting those with chronic mental health or other issues in remaining in their homes.

Without providing these services, neither the city nor the state programs can be correctly described as “Housing First.” The city’s RFP for “Housing First” services did not include ACT, and I do not believe the state Department of Health has contracted for those services for a state housing program, either.

The state’s “Permanent Supportive Housing” project, started in June, 2012, was described as a “Housing First Initiative,” but without supports and funding, it ended after a year. That’s not exactly, um, permanent. The total allocations for the state’s 2012 homeless projects was $,1000,000.00. That round but no doubt arbitrary number casts doubt that there was any needs or cost estimate done at all (or it might, for example, have come out $871,456, or something rooted in reality).

The state legislature’s other attempt at “Housing First” created a special fund, but put nothing in it.

The city, meanwhile, tried to drop a so-called “Housing First project” on long-suffering Chinatown. The 100-unit rental facility on River Street, even if the community had not objected to it, would not have had the needed supports. Certainly, in common with all so-called “Housing First” projects so far, it was inadequate in comparison to the need.

It was called the “Plan to End Chronic Homelessness in Hawaii,” a coordinated effort to identify causes of homelessness and to put an end to the problem within 10 years.

Six years after it was completed, the state has more than twice the number of homeless it had when the plan was written and public officials are taking extraordinary steps to take back the parks from squatters.

The plan’s title promised a lot. But its actual contents were not a commitment to action.

Finally, it’s important to add that Dr. Tsemberis visited Hawaii in 2003 (See: Housing First can work for Hawaii, Honolulu Advertiser, 11/16/2003). At that time, talk about “Housing First” was all the rage.

But the talk remained talk, and we’re still waiting for “Housing First” in Honolulu, even as the number of homeless living in the streets continues to escalate.

The visitor to Honolulu would have noticed a couple of other things in the paper. Not only can’t we manage to implement a successful housing program, but we can’t even inspect our gasoline pumps. More on that in the next article.