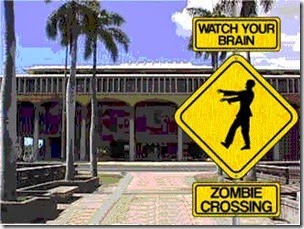 Sometimes a bill crosses over from one house to another—only to die. The other house is just not into that bill. Such is life in any state legislature.

If a bad bill dies, its opponents can move on to the next thing. If a good bill dies, well, there’s always next year…

Not so fast! This is the Hawaii state legislature. No matter how good or bad a bill smells, you can never be sure a bill is either dead or alive!

So, for example, SB165 crossed over from the Senate to the House—where it died. It might have been better left dead, but no, the Senate is going to have its way, one way or the other. So it’s baaack!

What is this ill bill? In part it says, “Requires DAGS to undertake lease buyback processing under the program of centralized engineering and office leasing services. Requires DAGS to facilitate facility agreements between the State and private investors…” Hmmm… could be special interests interested in this one.

A “Zombie” bill has been created, and this one may be unconstitutional as constituted. HB1366, a bill with a different title, Relating to state acquisition or development of real property. That has nothing to do with lease buybacks or facility agreements. Shucks, any Senator can see that…

Two bills with different titles and different purposes have been combined into one. 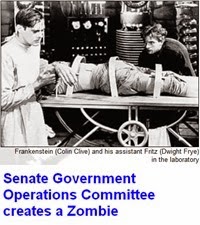 And as with the “Frankenbill” reported earlier, this monster was brought to life in Senator Dela Cruz’ Government Operations laboratory committee.

I don’t think this is the kind of Operation that the Senate ought to be experimenting with.

(image: Frankenstein (Colin Clive) and his assistant Fritz (Dwight Frye) in the laboratory, from the film Frankenstein, 1931)