Today’s Star-Advertiser and the latest Honolulu Magazine both arrived today. And placed side by side, they reveal a troubling truth about Hawaii. Isn’t there something very wrong with this picture? 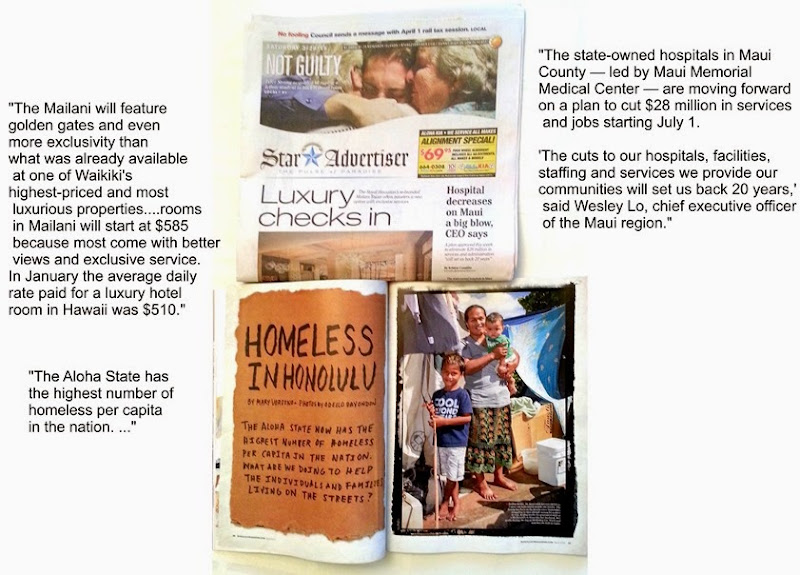 On the left of their front page, the Star-Advertiser features, with large picture, an article about the renovations in one of Waikiki’s latest luxury hotels. Apparently, to the editors, that’s the most important story today.

The Mailani will feature golden gates and even more exclusivity than what was already available at one of Wai­kiki's highest-priced and most luxurious properties.….rooms in Mai­lani will start at $585 because most come with better views and exclusive service. In January the average daily rate paid for a luxury hotel room in Hawaii was $510.

In the right column, with a smaller headline and hence subordinate to the main story, we find a sign of further deterioration in the economic situation on Neighbor Islands that has drained the pool of physicians and will now “set [the state-owned hospitals] back 20 years.”

The state-owned hospitals in Maui County — led by Maui Memorial Medical Center — are moving forward on a plan to cut $28 million in services and jobs starting July 1…. "The cuts to our hospitals, facilities, staffing and services we provide our communities will set us back 20 years," said Wesley Lo, chief executive officer of the Maui region.

What a contrast with that hotel article, especially given that homelessness in Hawaii is only the tip of the iceberg of the now-endemic poverty that defines real life in the state for too many people.

The juxtaposition reveals a stark inequality.

On one side of reality, luxury hotels and Kakaako condos cater to those out-of-towners who enrich hotel owners and developers.

In the other reality, a growing shortage of affordable homes and rentals, combined with low wages and the high cost of living has become a structural oppression that weighs on too many. It’s structural because it has been allowed to continue for a decade or more without attention and with no relief in sight. It’s oppression because the low wages paid in the hospitality industry (and there’s little else in our limited economy) make that hospitality industry highly profitable.

The state legislature could have enacted a living wage instead of the inadequate minimum wage that doesn’t even kick in now, when it is needed. There could be rent control and rent stabilization to keep people already in housing from being kicked out. The backlog of tens of thousands (24,000? 50,000? depends on who is speaking) of affordable rentals continues to grow unabated.

As to the homelessness situation, nothing that will make a difference in the annually growing numbers is yet in place. The state homeless czar has no budget. Although progress has been made, there’s no spending in view, no programs in place that will make a dent in the awful statistics.

It seems unfair that the luxury side of the economy isn’t benefitting the rest of us quite a bit more. What will it take—demonstrations in the streets of Waikiki to break loose some of that profit for those who live here and make the luxury possible? In other cities it might happen, but here, in the state where we uncomplainingly pay three times the national average for electricity, it’s unlikely that there will be a squeak about it.

So medical care on Maui could be set back 20 years. That won’t affect tourists in Waikiki, so not to worry.