Cuba has an attraction Hawaii should envy


“
Bookings to Cuba jumped 57 percent for one New York tour operator in the weeks after Washington said it would renew ties with Havana. In February, they were up 187 percent; and so far this month, nearly 250 percent.—from the AP story
”

Oh, barring a catastrophe, Hawaii will always remain a tourist destination. But look at the numbers in the pull-quote above! Our tourist industry could have some competition. 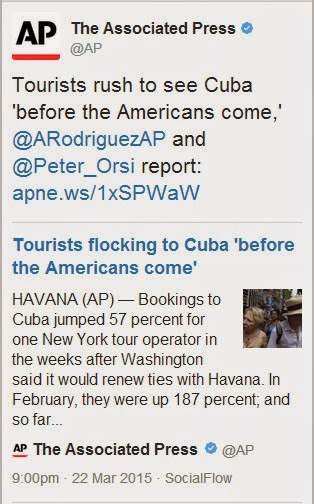 "Cuba has a very authentic atmosphere which you see nowhere else in the world," Gay Ben Aharon of Israel said while walking through Revolution Square. "I wanted to see it before the American world ... but also the modern Western world comes here."

The story indicates that Cuba isn’t quite ready for a tsunami of tourists.