It’s tempting to check out the closing sales of stores that are going out of business, but don’t let yourself be trapped by false bargains.

Radio Shack may start liquidation sales if it hasn’t already. I don’t know how they will do it exactly, but in the past, when we’ve experienced similar closings (CompUSA, Circuit City, a couple of video or music stores…), items on sale could actually be priced higher than they were at the same store previously. See earlier articles tracking the CompUSA shutdown here.

In a nutshell, liquidators purchase the entire inventory, and it is they, not the store, selling to you. They are clever, and their objective is to squeeze whatever they can out of the inventory and the customers. So some items may be removed because they can sell them at a higher price elsewhere. Other items may appear that the store never carried, but that the liquidator wants to dump. Signs will say “20% off,” but as we saw at the CompUSA selloff, the sign meant off of the manufacturer’s list price. The item would normally never sell for that much, but the gullible think they have a deal.

Snipping from one of my CompUSA articles: 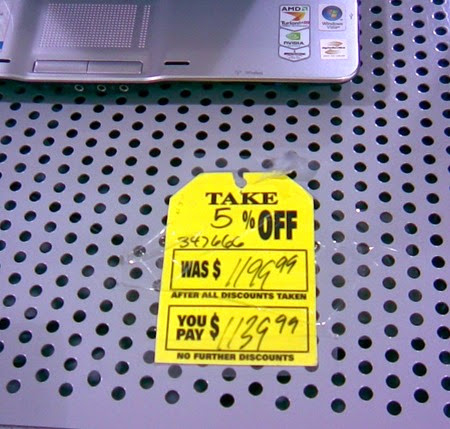 I've had my eye on the HP touchscreen laptop that CompUSA used to offer for $999.99. Last week the liquidators were still offering it for $1139.99, clearly no bargain.

But get this—the same computer is in this week's Office Depot ad for $699.99.

The con at the CompUSA liquidation was that although the tag says “Was $1199.99” it never “was” that price. Also, some more desirable laptops were not on the shelves. Perhaps they were shipped somewhere where they’d get a better price for them.

Also, as my earlier article notes, the keys were popping off of the keyboard of the machine I was looking at. It was already defective, and not yet sold. Wanna bet someone grabbed it anyway? Liquidators count on that happening.

Usually there are no returns. And keep in mind that some things sold by Radio Shack did not work very well ever. In 2013 I thought the Bluetooth headset sold on Black Friday was a good deal, but on getting it home, the sound was distorted. I had bought two, and I returned two. It’s no bargain if it doesn’t work. They are still selling that model.

I won’t miss Radio Shack as it is now. In the past, I appreciated being able to buy small parts there to keep my stuff working. But the parts disappeared. What they do carry is most often overpriced. Black Friday prices for many items merely came down to about the same one could get elsewhere any time of year.

For Black Friday 2014 I gave them a pass. Several days before Friday I peeked at one of those websites that leak the newspaper ad in advance. I found this deal for batteries—and I can always use more batteries: 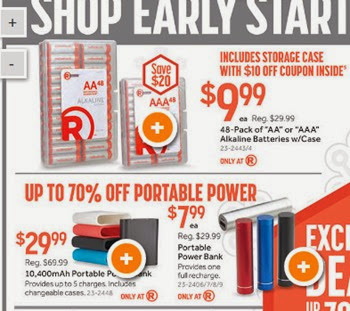 Now,48 batteries at the 2013 Black Friday price would have been $9.12, but ok, this is about the same. The Li-Ion battery packs were competitive with the cost of ordering one from China, and presumably could be returned if defective, an advantage. Maybe, I thought, I’ll drop in at the nearby store and see if they still have any left mid-day on Friday.

But Radio Shack marks everything up drastically in Hawaii. There is no excuse for this: 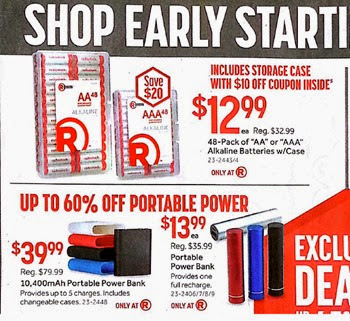 At $12.99, the batteries are no longer a bargain. Might as well buy them from Costco (although I’ve found that Kirkland batteries leak…). Look what has happened to the power supplies! The high-capacity item was up $10 over the national ad price, and the cheaper one was up $6.00. Shipping to Hawaii does not cost that much for such small items. Far from being a bargain, one could have done better at Don Quijote, for example, any day, for a comparable item. And no need to line up early hoping to get one of these “bargains.”

So Radio Shack was lost to me long before they declared bankruptcy.

Be warned if you attend any liquidation, it’s not being done for your benefit.

(Note: Walgreens also marks up items for Hawaii stores. Check your local ad against their prices posted on the Internet.)