The pull-quote above is from a December report that concluded

Across the U.S., a haphazard system of lax laws, minimal oversight and almost no accountability puts guns in the hands of guards who endanger public safety, a yearlong investigation by The Center for Investigative Reporting and CNN has found.

Here’s the summary for Hawaii: 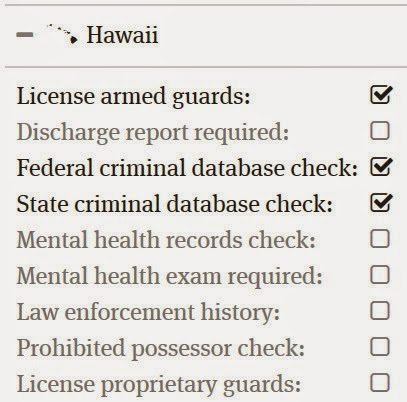 The heading speak for themselves, except perhaps the definition of “proprietary guards.” From the report:

Proprietary guards are hired directly by a business - such as a grocery store, bar or apartment complex - rather than through a contract security firm. Many states that require licenses for armed guards do not license armed proprietary guards, allowing individual employers to set requirements for background checks and training.

According to the report, Hawaii does not require any firearms training for armed guards. That’s right: zero.

Put it all together and Hawaii’s lax requirements could indeed be leaving the public unprotected.

Clearly, this calls for verification and further investigation. Disappeared News has raised the alarm, and I hope the issue will be picked up by the commercial media. Since there is no requirement for discharge reports, the research may not be easy.