On the morning of 7 January 2015, at about 11:30 local time, two masked gunmen armed with assault rifles and other weapons forced their way into the offices of the French satirical weekly newspaper Charlie Hebdo in Paris. They fired up to 50 shots, while shouting "Allahu Akbar" (Arabic for "God is [the] greatest"), killed 11 people and injured 11 others during the attack. They then killed a French National Police officer shortly after.
--Wikipedia

After the initial shock and revulsion over the January 7 murders in Paris, I was encouraged to see the massive solidarity that formed around the hashtag #jesuischarlie and the subsequent mass protests in France and elsewhere. The rally, keynoted by European and world leaders linking arms in the street, was the largest in France’s history. It was also a rare and benign photo op for those leaders—who could bask in a world spotlight as they objected to the outrageous attack on press freedom represented by the killing.

President Obama didn’t attend, and while there was much speculation and condemnation of his absence (as well as the absence of Attorney General Eric Holder who was in France himself at the time), their non-participation led me to think some more. It could not have been a casual decision. It wasn’t that he preferred to watch football on TV, as some outraged pundits declared. So what’s up with that?

As the rally and worldwide protests unfolded, other voices chimed in. For example, the photos of the heads of state linking arms bothered those who saw them as supporting suppression of journalists in their own countries—and Obama would have to face criticism for that if he turned up. Obama, far from bringing the transparency to government that he promised, has instead waged an unprecedented campaign against whistleblowers and journalists who reported on their revelations.

I’ll get back to the hypocrisy in a moment.

My next feelings were that “I am not Charlie Hebdo” because I cannot see the value in publishing cartoons that offend such a large number of people just to make a point about press freedom—and Charlie Hebdo, in its most recent issue, the one after the murders, featured another such cartoon on its cover. Why? Of course, one might debate the importance of that, but in any case, while the murders were horrific, on the other hand, I didn’t much go for the need to repeat the offense.

All this lacks context. So I was grateful to read The Charlie Hebdo cartoons no one is showing you. (Dailykos, 1/11/2015) which recapped the cartoons of Cabu, one of the cartoonists killed in Paris. Check out the article—it features cartoons that were directly aimed at social ills in France over the past decades. So perhaps one might say “I am Charlie Hebdo” in support of their overall work, not just the cartoons depicting the Prophet Mohammed. It’s so easy to form passionate and seemingly valid opinions that are nevertheless shortsighted and perhaps wrong. I’ve since googled around to find what I can of Charlie Hebdo’s past work, assisted by Google Translate to make up for my inability to read French.

It has also been pointed out along the way that France has restrictions on press freedom. The articles on that have evolved and provide better context recently—see for example, French hate speech laws are less simplistic than you think (Washington Post, 1/18/2015). Related: Why French Law Treats Dieudonné and Charlie Hebdo Differently (New Yorker, 1/15/2015).

But my own evolving and initially hasty views on the magazine are unimportant. I’m willing to read, speak to others, and learn. Some recent news articles are better reasoned than the bunch hastily printed or posted immediately after the killings.

Writing in a CNN op-ed published on Monday, Chomsky said that "terrorist" attacks perpetrated by the West did not spark outrage such as the Hebdo attack, nor did they bring calls for "inquiries into the roots of the attack in Christian culture and history," as the Hebdo attacks did for Muslim culture.

The JP noted that Chomsky cited the 1999 NATO missile attack on Serbian state television headquarters that killed 16 journalists, along with several other examples of individual or Western-sponsored attacks that have not been branded as “terrorism.” Further, and this is an Israeli newspaper, remember:

Challenging the idea that the Charlie Hebdo attack was the greatest attack against journalism "in living memory," Chomsky gave the example of Israel. He said that during Operation Protective Edge in the summer of 2014, "many journalists were murdered, sometimes in well-marked press cars, along with thousands of others, while the Israeli-run outdoor prison was again reduced to rubble on pretexts that collapse instantly on examination."

Of course, I also had in mind the US targeting and killing of journalists during the Iraq war.

In viewing the many press images of the world leaders joining arms in the Paris rally I did have in mind that Egypt is still holding three Al Jazeera journalists (among 11 currently in Egyptian jails), one of whom is an Australian national, and that President Obama hasn’t yet twisted arms to gain their release. The Egyptian military, installing itself in a coup that Obama wouldn’t recognize as such, continues to receive massive US aid support despite its suppression of press freedom and its own massacres, for example, of approximately 1,000 people in Rabaa Square on August 14, 2013—they were supporters of democratically-elected President Mohamed Morsi—and that was only one instance of Egyptian mass killings.

Other leaders present at that Paris rally also have significant stains on their leadership that we should not overlook. My impression is shared by others, for example:

Reporters Without Borders is appalled by the presence of leaders from countries where journalists and bloggers are systematically persecuted such as Egypt (which is ranked 159th out of 180 countries in RWB’s press freedom index), Russia (148th), Turkey (154th) and United Arab Emirates (118th).

[Reporters Without Borders, RWB condemns presence of “predators” in Paris march, calls for solidarity with “all Charlies”, 1/11/2015]

Saudi Arabia has sentenced blogger Raif Badawi to 1,000 lashes amid condemnation by rights groups and others (including a group of US Senators). But the Obama administration continues to support and supply the regime. The blogger’s attorney has been sentenced to 15 years in prison—you’d think Obama might have enough motivation to raise at least minimal outrage about the behavior of his strong “coalition partner.” Had he attended the rally in solidarity with those tainted leaders he might have caught more flack than he did by staying home instead. 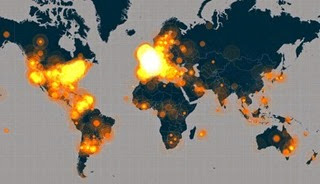 character tweets. The hashtag #jesuisCharlie” became the most tweeted hashtag in history, but as the diagram shows, that resulted mostly from activity in the US, Europe, Canada and Australia. It’s certainly possible that the rest of the world may hold some important and perhaps contrary views on the aftermath and Western reaction in particular, both those who tweet and those who are not allowed to, or those who feel that the issues raised by the Paris murders were far more complicated than most of the Western press are willing to discuss.

The tweets have spurred discussion that could spur change—or not, since our collective memory appears to be quite short. Let’s see what happens, if anything, as a result of the unfortunate events in Paris. Now, please go read the Chomsky commentary.