Well, I was surprised to see that demonstrations against police brutality are still being ignored by the Star-Advertiser. Aside from the ongoing, often daily protests, last night (Sunday night) brought a change in tactics in Berkeley—formerly peaceful demonstrations turned destructive if just short of violent.

Twitter and breaking news apps provided real-tome coverage. Oh—there was even a demonstration in Honolulu that the paper omitted. In truth, it was kind of tiny… 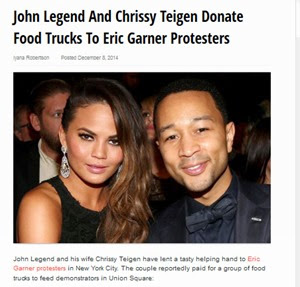 Here’s what happened in Berkeley extracted from tweets—you can learn more from Google. And the demonstrations did continue today—the Verrazano Bridge was closed down today, as an example. The bridge was blocked for seven minutes “in honor of the seven minutes that NYPD were recorded not providing medical care to Eric Garner after Officer Pantaleo applied a chokehold to him.”

Berkeley: Alcatraz & Telegraph taken over. Fires in trash cans and dumpsters, attempt to set a patrol car on fire. Unlike Sunday night, police and fire trucks avoided the area, letting the fires burn. While one faction tried to protect businesses such as Whole Foods, others smashed windows and glass doors. People carried out apple cider and Christmas trees from Whole Foods (Christmas trees??). Wells Fargo’s ATM was smashed. The City Center’s glass door was smashed. Protesters looted Radio Shack. Those trying to maintain a peaceful protest referred to an “anarchist takeover” and a “kindergarten philosophy.”

“Irony is that the young white men doing this are not going to end up like Mike Brown.” A response: “not irony. It’s fact.”

More at Berkeley: earlier, protesters threw objects at the police, others spray-painted City Hall. At the same time, other protesters chanted “peaceful protest” and tried to stop the vandalism. A cleanup was scheduled for 9 am Monday. The student newspaper reporters and editors provided some of the best real-time accounts of the struggle.

Seattle: Westlake Center and an intersection were blocked

New York: take over Forever21 in Times Square, march on the streets, chant: “no justice no peace”, Macy’s Herald Square, Grand Central Station choke in. A Monday action is planned for Barclays—William and Kate are in town, the royals will be there for a Nets game #RoyalShutDown

Philadelphia: die in after Eagles game

LA: demonstration to “black out Hollywood:

Washington, DC: demonstration marched past the Dept. of Justice, signs carried bearing the names of black Americans killed by police

Chicago: Ministers lie down on the street during protest, protest reported to last six hours.

So that’s the disappeared news, folks, at least if your only source of information is the Star-Advertiser.

I have not been following the Berkeley protests closely, but it is my impression it was the cops who resorted to "violence" first, not the protestors or even a smaller "anarchist" subset of the protestors. The cops all across the country have militarized their gear, but also their strategic approach to demonstrations.

The tactic of demonstrators to disrupt traffic is illegal and not something most of us want to encourage. Given the dearth of effective means for expressing outrage and showing the rulers of this society that the crimes they are permitting--like the growing police killing of young black and brown men--will NOT be tolerated, it is natural that things like traffic disruption might become the tactic of choice for expressing that outrage.

I am more mellow about traffic disruption than some people. Heck, I live in East Honolulu and the Honolulu Marathon this Sunday will disrupt traffic for a few hours. If that is OK, why not for the rare occasions when enough people are outraged at government actions? Like allowing these murders by police to go unpunished?

But the cops have a different view and have escalated their response. In addition, the cops do not like to be "disrespected" and will fly into a blind rage when it happens. The killing of Michael Brown appears to have occured in large part because the cop who murdered him felt disrespected and kept firing his gun into Brown as even as he was falling to make sure he was dead.

The police in Berkeley started "kettling" the demonstrators when they massed near police headquarters. They teargassed them and hit them with batons. As I understand it, it was only after police violence was unleashed that the windows of the Trader Joe's store were smashed.

I am not a fan of self-styled revolutionaries in the grip of romantic, street-fighting fantasies derived from images of "storming he barricades" in 1848 Europe or during the rising of the Paris Commune in 1871(?). Not because I never believe violence is justified. But because it is generally an attempted shortcut adopted by immature, infantile protestors who have contempt for democracy and few real ties with "the People" they pretend to be acting on behalf of.

When we view such actions and are unable to determine at a glance whether they "anarchists" were sincere or were undercover police agents, it strongly suggests the nascent "movement" has to become more thoughtful, more responsible, less indulgent of the do it yourself hyper-individualism/unaccountability of so-called "anarchist" hoodlums.

Many, perhaps most, sincere anarchists, have moved beyond a puerile fascination with "street-fighting tactics in favor of disciplined, including "self-disciplined," civil disobedience and non-violence. Gandhi, rather than Bakunin, should be the guide for their actions.

But those cops who are drawn towards repression and those rioters who are drawn towards violence against people or property, share a common contempt towards democracy, consensus and mass expressions of free speech. Both embrace a hyper-masculinist notion of "power." Historically, fascism grew with a strong infusion of the syndicalist spirit and actual personnel. George Sorel's "General Strike" and Mussolini's March on Rome grew out of a similar mindset and strategic orientation of romantic drama conducted by a few, bold individuals, disciplined and courageous, with contempt for the "sheeple" and the liberals who advocated consensus and discussion.

I have great respect for sincere anarchists who do not display contempt for democracy. As my apocryphal Bubbe once said, "Don't trust anyone who isn't at least a little bit anarchist."