To understand voting in Hawaii: it wouldn’t hurt if we did better polling…


“
Hawaii, meanwhile, has a long history of terrible polling, perhaps because of the state’s demographic makeup. Between 1998 and 2012, polls of gubernatorial and Senate elections there missed the final margin by an average of almost 12 points, the largest error of any state but Wyoming, according to the FiveThirtyEight database.
”

I figured I’d mosey over to fivethirtyeight.com to see how Nate Silver’s predictions worked out, but I soon tripped over a couple of mentions about Hawaii’s lousy polling. 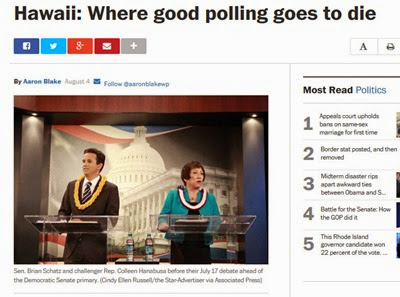 Who knew? I don’t recall much self-criticism in the local media. The article at the right, Hawaii: Where good polling goes to die, ran in the Washington Post. So much of the rest of the nation knew this about us, but we remained ignorant.

Going back in time, this, from fivethirtyeight:

In 1998, Democrat Ben Cayetano was re-elected as Hawaii’s governor despite trailing Republican Linda Lingle by 11 percentage points in pre-election surveys.

So ok, all those annoying calls you get in the months before each election don’t work very well despite the effort and expense. Why?

Also, as we've written before, polling in Hawaii is difficult for a host of reasons — and in large part because the state's large Asian American population is more difficult to correctly sample and often less willing to answer a pollster's questions.

This is especially a problem given that many of the state's big Democratic primaries pit a white candidate against an Asian American one. Advertiser polling in 2002 and 2010 showed a better picture for the Asian American candidates in those races than was probably the case, while Civil Beat's 2012 poll skewed heavily toward the white candidate, Case.

There is one poll that’s deadly accurate: it was taken on Tuesday, election day. It was a sample of 34.9% of all electoral voters.