The good, the bad, and then there’s Kakaako, the ugly 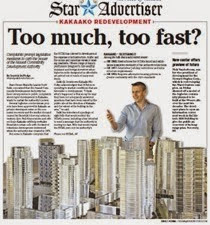 The newspaper asked “Too much, too fast?” as its headline to accompany a photo of proposed development in the Kakaako area of downtown Honolulu.

What’s good about this? That Kakaako land is being made available for development. We have long had a crushing housing shortage on Oahu.

What’s bad about this? That it’s not for us. The claim of “mixed-use development” is tilted too far towards the wealthy and ultra-wealthy while pent-up demand for affordable housing, including affordable rentals, goes nowhere fast.

What’s ugly about this? Just about everything. Look at those drab buildings. Forget about a “Hawaiian sense of place,” the model pictured more closely resembles Hong Kong than Hawaii.

What architectural principles, if any, are developers held to before the HCDA rubber stamps their plans? Do we have and apply an urban land-use framework that would prohibit the sprouting of concrete monoliths like those depicted on the newspaper front page? Do we have and enforce landscape infrastructure requirements that would preserve a quality environment to be enjoyed by all?

Housing has long been and remains a critical issue for Oahu residents. The shortage of affordable housing has, as one of its symptoms, lead to an increase in homelessness that put Hawaii in the record books in not a good way. It is a symptom of failure to administer government for the benefit of its citizens.

I am saddened that the reason poverty and homelessness are at last getting media attention is because hotel lobbyists and Waikiki businesses have become annoyed with people living on the streets. Developers can’t be too fond of the contrast between penthouses and sidewalk tents, either.

In reaction, the city has proposed to sweep away and exile the homeless to Sand Island. What about doubling down on creating an environment in which real housing will become available, instead?

The various task forces working on the issue at the state or city level, searching desperately for solutions to the affordable rental crisis that has been plaguing families for many years, posit warehousing people in tiny boxes (“micro-units”) or containers of one sort or another (and presumably not in Kakaako, near the luxury apartments!).

That’s an architecture of the poor, a surrender, not a solution. At least, make it temporary. Is Hawaii a place where we live in tiny boxes and containers? That’s more appropriate for a third-world country.

Hard-working, decent people should be able to afford decent housing—and should expect our government to facilitate that.

Honolulu’s inattention to its ongoing housing crisis has lead not only to homelessness but to marginalization of communities. Packing these communities into boxes is no solution. It is a surrender to the unsatisfactory status quo. We need a more humanistic solution than that.

(One glimmer of hope may be—and it’s not something that anyone can plan on—should the military downsize, we might get some of their quality housing to re-purpose.)

The combination of low wages and high housing costs is a slow-acting poison. It is not economically sustainable. Yes, there’s demand for high-end high-roller living—with penthouses above and Whole Foods emporia below. We should definitely have some of that. But to issue permits for the development pictured—to let it go forward without at least tapping the opportunity to strong-arm greedy developers into contributing to our overall housing needs—is to destroy, rather than enhance, the island’s chance to overcome endemic poverty and to support an orderly transition to the sustainable economy we badly need.

O'ahu has become unrecognizable to me in so many ways. Being born and raised here doesn't seem to matter -- we have gone to hell in a hand basket faster in the last 10 to 15 years than in my entire lifetime!

I was in Waikiki the other night and it felt like a foreign country.

Kakaako was nice but now it's just another disaster. I would love to try and put a positive spin on this, Larry, but I can't seem to come up with anything.