“
In what officials have billed as one of the most ambitious programs of its kind in the United States, New York City has, with little fanfare, embarked on a roughly 20-year, $2.4 billion project intended to protect local waterways, relying in large measure on “curbside gardens” that capture and retain storm-water runoff.
”

The best thing to do with stormwater is to let it go into the ground where it falls. That’s tough when the ground is covered with concrete and asphalt. The alternative is to tax the citizens for pipes necessary to take the water away.

New York City is going a step further—they are trying to short-circuit the stormwater that now ends up in the streets and let it percolate into the ground by installing attractive “curbside gardens.”

The goal, according to the city’s Department of Environmental Protection, is to soften the “impervious urban landscape” of asphalt and concrete and absorb rainfall that might otherwise funnel into the combined sewer system. (During heavy rain, storm water can exceed the capacity of the city treatment plants. Overflows are discharged into local waterways to avoid flooding the plants, which can harm water quality.)

Check the links for pictures and discussion.

Many other states and municipalities have passed ordinances requiring developers to handle the stormwater that falls on their property. That is, the city, say, will not let them just dump it into the streets or into the city stormwater system. They have to arrange their property so that there is a way for the water to drip back into the ground, the way it used to before they got there. The rainwater then refills the aquifers instead of being piped into rivers, streams and the ocean.

At present, in Honolulu, the city handles the storm water. From a Disappeared News article from November, 2012, a diagram showing part of the stormwater system we all pay for:

Mostly, the infrastructure, paid for by your taxes and mine, never gets into the news, and so remains below public notice. After Hurricane Ana, though, there was this:

Honolulu is restoring power to a major sewage treatment plant that was overwhelmed by storm water and sludge during Hurricane Ana. 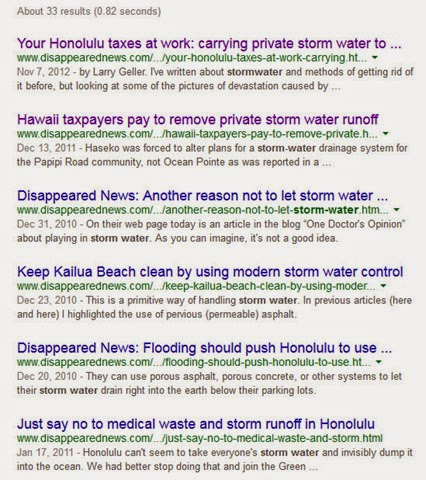 I’ve written often about how Honolulu wastes our taxpayer money, and its failure to control stormwater, when other regions have done so for years, is one of my pet peeves.

Historically, the city provided a free service to land owners, but it’s one that has cost us over the years and ought to be short-circuited. For example, if you walk down a main street in Chinatown, you’ll see that rain from the roofs and alleys is simply piped down and discharged into the streets. 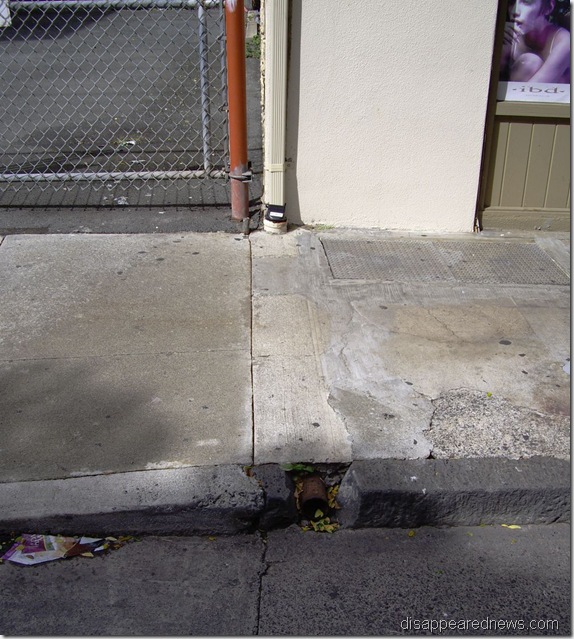 There’s not much to be done about that. But any new development should not be granted this “service” when it can be required to take care of its own water. 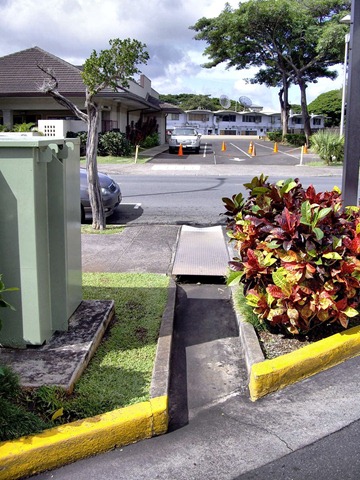 Here's a snapshot of a drainage ditch leaving the Zippy’s Vineyard Blvd. property and taking water under the public sidewalk and into the street. The Zippy’s property is extensive enough, and even has a green area fronting Vineyard Boulevard, that it is perfectly able to take care of its own runoff. But there is no requirement for it to do so.

I’ve also posted pictures of the drains throughout the Kapiolani Community College parking lot. They’re just like the drain slots you see on street corners in town. Although they have little medallions advising that there should be no dumping, the water goes to the ocean, in practice every leaf, every bit of rubbish, that falls on the asphalt can be washed down those drains. Plastic bags, cigarette butts, everything goes down there, along with water that could instead be drained right into the ground through the use of permeable asphalt or other measures.

KCC was not required to put in those systems when the parking lots were constructed.

At least, we could require new developments to handle their own water and consider measures such as New York City has adopted.

Going back to Zippy’s for a moment, here’s a snap of the front of the property: 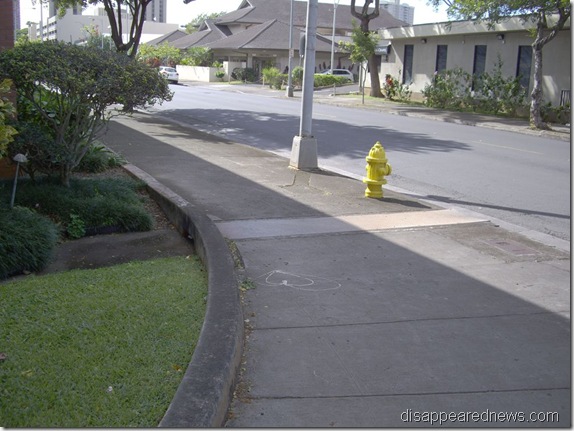 That’s another channel going under the sidewalk to drain water off the planted area and into the street. There’s no reason why that area cannot simply discharge its water into the ground. Who knows what fertilizers or pesticides are being washed into the gutter and ultimately into the ocean?

There’s no reason except that it’s easier for the city to do nothing as long as we are willing to pay and pay and pay to let the city handle stormwater flowing into city pipes.

I’d like to end by going back to that KCC parking lot. We taxpayers foot the bill for removing an enormous amount of water just from there. But how about this as an alternative (one of many possibilities). The video demonstrates permeable asphalt. There are other ways to dispose of runoff that channel it back into the ground instead of dumping it into the city stormwater system.

If New York City is investing all that money, there must be a reason. As taxpayers, we should demand answers from our city government since we are the ones paying for the system—and developers reap the benefit of taxpayer-funded infrastructure.

Though relatively untested on the scale outlined by the de Blasio administration, similar gardens have proved effective in other cities, most notably Philadelphia, according to advocates and researchers. The push for so-called green infrastructure projects across the country dates to at least 1987, when Congress revised the federal Clean Water Act.