a rant by Larry Geller

I’m still an optimist, but I don’t like what I am seeing around myself. For example, outside the window, traffic on the H-1 only gets worse. I looked out the other night and felt that the road rage could build to the point where it explodes! 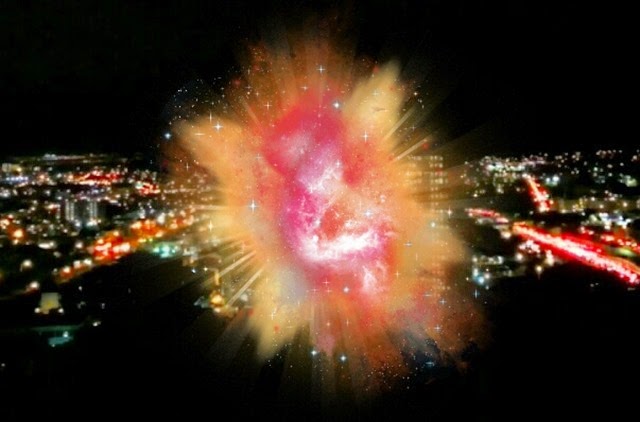 The H-1, Vineyard Boulevard, School Street and S. King Street were all visible, all bumper-to-bumper or not moving at all. I just had to draw what I was thinking.

If you look at the extreme right of the photo, cars are backed up on the on-ramp for blocks—waiting to get onto a highway that is hardly moving at all.

At one time Honolulu resembled a kind of Garden of Eden, a tropical paradise. But that has already vanished under spreading layers of concrete and asphalt. Farms taken away to create an unaffordable suburbia, condos stealing precious land and views to house only the super-rich, near unbearable daily commute times—these are only the latest manifestations of a rapid decline in living standards on this island.

We even have to defend the country, it seems, or it will be swallowed up by developers. There will be little of Eden left that can be recognized. Yes, keep the country country, it is all we have left.

Aside from the developer-government complex, probably few of us have asked for this. Condos for the super-rich do not generate many jobs, and the retail jobs needed to supply those folks with caviar, fine cheeses and Italian shoes are few and pay badly. What we need is housing for ourselves, not for them. Ask anyone which is more important, an affordable rent or ritzy neighbors.

Are we falling apart? And can that explain the low civic participation, one manifestation of which is low voter turnout?

But look—the nation has seen a decline in wages and living standards over (say) the last 30 years, and Hawaii has seen the same. Our top college graduates must leave Hawaii to find jobs suited to their achievements. Even highschoolers face a grim future because there so few jobs for them, and at the same time, their prospects of being able to move out from their parent’s homes get dimmer each passing day. Even if they find a job, it won’t pay the rent.

Vanishing farms, long commutes, and all the other symptoms of decay seem intractable. What can we do as individuals to save this place? There is no direction for us. So mostly we do nothing.

Nor does the university help us. There might as well be a wall around most of it, call it the Great Wall of Manoa, that cements the separation. Perhaps inside they know the answers—or more important, they are capable of helping us to find the answers—but yet, nothing happens, and the decline of the Honolulu we knew continues. I can’t get it out of my head. Our best minds have their noses in textbooks studying the words of dead white men while their knowledge and curiosity could be put to practical use. Study Honolulu, please.

Is this just negative thinking? Shouldn’t we be concerned that mega-condos are winning out over preservation of our air, water, farmland, open spaces, and straining the carrying capacity of the land itself? Just as the world largely ignores climate change with inevitable consequences, are we, here, on a smaller scale, ignoring our march to becoming a Hong Kong in the Pacific?

If that’s ok with everyone, fine. I don’t think it is, but again, there’s been no survey, no poll, no study. Instead, the condos rise, the traffic increases, and we remain victims of it all.

Do we need the super-rich at all, or do we need jobs paying a living wage and affordable housing?

I like to think that we can take charge of our future. How to get started? How to draw a different roadmap than the one we have?

Having graduated from Iolani in 1963 and been returning to the islands scores of time since, I cannot agree more with your Garden of Eden to Kakaako condos piece. The only way I can see to stop the madness is to tax great wealth and luxury living at a much higher rate and use that tax for affordable housing, better education, protection of species and sustainable agriculture etc....If anyone knows of other ways, I would welcome hearing about them. Thanks for your work. George Cattermole