“
While serving as a U.S. Marine on patrol in Afghanistan, we wore desert camouflage to blend in with our surroundings, carried rifles to shoot back when under enemy attack, and drove around in armored vehicles to ward off roadside bombs.

We looked intimidating, but all of our vehicles and equipment had a clear purpose for combat against enemy forces. So why is this same gear being used on our city streets?—Paul Szoldra in The Business Insider, 10/12/2014
”
“…Hawaii is the only state not participating, apparently, in the 1033 program…—Terai, Guy B LTC USARMY NG HIARNG (US) in response to MuckRock’s Shawn Musgrave on Oct. 3, 2014
”

The Militarization of Everywhere Else

America’s Founding Fathers wouldn’t recognize the country today. Here’s what Hawaii is missing out on: 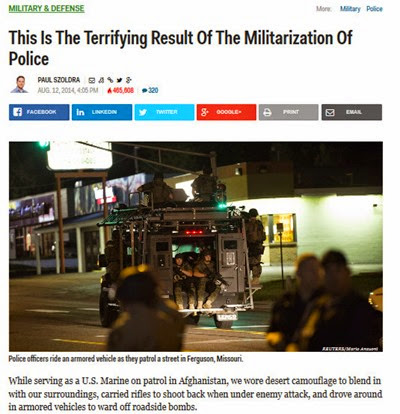 The militarization of America’s police was on grand display during the #Ferguson protests and is still fresh in our minds, even after the chaos of national elections.

It’s remarkable that no protesters were killed—one day, if Ferguson repeats elsewhere, it is sure to happen. Remember the videos of that cop with an automatic weapon pointing it at protesters and threatening to kill them? All it would have taken would be an inch contraction of his index finger, in anger or accidentally, for him to have carried out his threat.

The disenfranchised population of a Missouri town reacted to the police shooting of a Black man with generally peaceful protests, but they were met with full military force on the part of the police. It was the show of force and the display of military equipment that threatened social stability in Ferguson, not the peaceful protests. The police disregarded the Constitution as they imposed limitations on speech, assembly and freedom of the press—and they got away with it.

A fear of rebellion, particularly Black rebellion, but these days extended even to peace movements, is deeply rooted in America’s white-dominated society. The police have played out their role from the very beginning—New York police sent back both runaway and freed slaves to the South in their earliest days, for example, when it was legal to do so and when it was not. Again in New York, the policy and practice of “stop and frisk” persisted for years, terrorizing Black and Latino communities, and may only recently have come to an end (we’ll see).

Add to this mix the provisioning of local police forces with military equipment under the 1033 program and law enforcement becomes a threat to the rule of law.

Their uniform would be mistaken for a soldier's if it weren't for their "Police" patches. They wear green tops, and pants fashioned after the U.S. Marine Corps MARPAT camouflage pattern. And they stand in front of a massive uparmored truck called a Bearcat, similar in look to a mine-resistant ambush protected vehicle, or as the troops who rode in them call it, the MRAP.—Business Insider
Police are currently using their military toys not for homeland security, not for counter-terrorism (though it’s possible that they view peaceful protesters as terrorists…) but for drug raids and other mundane police tasks. It’s as though they have been watching too much cable TV. And city government, to whom the are ostensibly responsible, has failed to restrain them. For example, this:

From the way police entered the house--helmeted and masked, guns drawn and shields in front, knocking down the door with a battering ram and rushing inside--you might think they were raiding a den of armed criminals.

In fact they were looking for $1,000-worth of clothes and electronics allegedly bought with a stolen credit card. They found none of these things, but arrested two people in the house on unrelated charges.

They narrowly avoided tragedy. On hearing intruders break in, the homeowner's son, a disabled ex-serviceman, reached for his (legal) gun. Luckily, he heard the police announce themselves and holstered it; otherwise, "they probably would have shot me," he says. His mother, Sally Prince, says she is now traumatised.
…
Peter Kraska, a professor at Eastern Kentucky University's School of Justice Studies, estimates that SWAT teams were deployed about 3,000 times in 1980 but are now used around 50,000 times a year. Some cities use them for routine patrols in high-crime areas. Baltimore and Dallas have used them to break up poker games. In 2010 New Haven, Connecticut sent a SWAT team to a bar suspected of serving under-age drinkers.

[The Economist, via the Business Insider, Why America's Police Are Becoming So Militarized, 3/21/2014]

In August, when the dramatic events in Ferguson brought the Defense Department's 1033 program to national scrutiny, MuckRock submitted public records requests to all 50 state coordinators. Since the Pentagon refuses to disclose which police departments nationwide had received weapons, armored vehicles and even bomb robots via the 1033 program, we asked each state directly.

In response to a Freedom of Information Request by MuckRock in Hawaii, a number of documents dating from around 2005 were turned over—because, the response noted, there was nothing more recent.

And although there were some camouflage outfits listed, and an ambulance and a truck, for example, most of the swag consisted of file cabinets and other office supplies.

Full documentation of the Hawaii FOIA request is on the MuckRock website here, and it’s very instructive—if anyone is interested in doing a FOIA, it’s a good example of the process. The documents received are also posted on that page. Have a look at it to see what the Maui Police Department, among other agencies, received from the feds.

Here’s a snip from the first page of one list:

Of course, there’s lots more, but there are no MRAPs, anyway. And who knows why there are cold-weather parkas sent to Hawaii. The M1008 at the top of the list is an antiquated Chevy pickup truck.

Now, in many areas of endeavor, Hawaii is simply slow, or behind the curve. There’s nothing to say that a cargo ship won’t show up one day soon with those MRAPs and sound cannons.

All it would take would be a bombing, or an incident at our relatively unguarded State Capitol, for the Honolulu and other police departments to file their heavy equipment requests with Washington.

In the meantime, if the response to the MuckRock FOIA is really all that there is to tell, Hawaii is actually doing the sensible thing by not setting up a polarization between its citizens and its police. Another possibility is that, using taxpayer money instead of a federal handout, they’ve already gone shopping for what they need.

Outside of Hawaii, cities have become huge militarized zones, which cannot but have dire consequences down the road. This is no exaggeration if SWAT teams are being used 50,000 times a year in this country.

Combine militarization with the pervasive security state revealed by Edward Snowden, the cruelty of US immigration policy and the grasp of the private prison industry, and the stage is set for a level of internal strife that the country has not seen in its entire history.

Lucky we live Hawaii, it seems.

2006? Isn't that kind of useless? Most of this stuff has apparently been "donated" more recently... including the "trouser cams" (I'm surprised Davind Letterman hasn't picked up on those...)