FACE gets overwhelming support for its affordable housing advocacy

The keynote address delivered by Mayor Kirk Caldwell was, for this writer, a major disappointment. I sat on my hands through all the applause that political speeches elicit from an audience. Yet Caldwell’s speech can also be viewed as a positive statement. So why my disappointment? 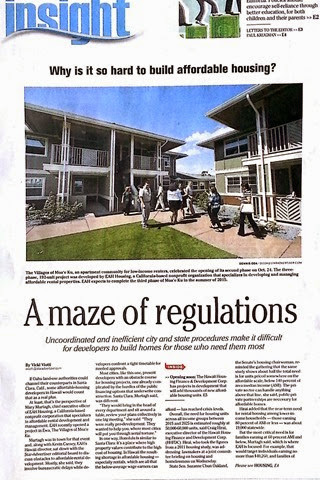 Read today’s paper, which describes one aspect of the affordable housing problem which has paralyzed Honolulu for the past decades.

Vicki Viotti covers the territory well in her editorial A maze of regulations: Uncoordinated and inefficient city and state procedures make it difficult for developers to build homes for those who need them most (Star-Advertiser p. E1, 11/16/2014).

The high cost of housing, along with outrageously high energy bills and food costs keep a large number of Hawaii’s citizens in perpetual poverty and result in multi-generational families stuck living together in inadequate housing. As was explicitly stated several times during the day, no number of working hours is sufficient for most families to pay the rent, much less feed themselves. Children are forced leave Hawaii and their parents in order to get jobs on the Continent suited to their education and abilities.

If nothing changes, more Hawaii residents will be priced out.

James Fitzpatrick, a community organizer with FACE, said he only sees his brother at Christmas or Thanksgiving since his brother left the islands to live somewhere more affordable.

“We have become tourists in our own neighborhoods,” he said.

It was a familiar refrain at Saturday’s conference — stories of family and friends forced to leave Hawaii because of the high cost of living.

There’s nothing new about that, although it bears re-stating. A passive population and an uncaring government have allowed developer greed to rule the state. When I arrived in Hawaii so many years ago there were already articles lamenting the “brain drain,” but nothing was done to overcome the obstacles that kept people from returning to their island home.

So why did I not applaud Caldwell?

The shortfall in affordable rentals is variously cited as around 18,000 to 24,000 depending on scope of the survey. Yet Caldwell promised 2,000 units.

As you know from earlier articles here and elsewhere, his answer to homelessness is enforcement of cruel ordinances that criminalize homelessness and poverty. The city’s approach to Housing First is inadequate, and that program might better be left to the state. 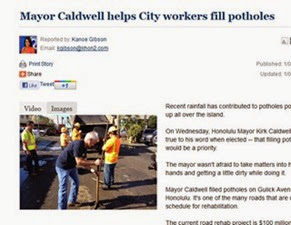 The Mayor’s plan falls far short of what is needed. It’s like shoveling asphalt into a pothole as a solution to Hawaii’s bad road conditions. The Mayor’s address was a welcome gesture, and a needed one, but thoroughly inadequate. Attention must also be given to helping  people stay in the houses or apartments that they have, which means rent control, rent stabilization, or some other effective countermeasure to perpetually rising rents. If rents continue to rise, then people will drop into the category of needing city-supported home construction, until the rental market stabilizes, which could be a very long time coming.

We need to see action, and we need to have measurements in place and plans with timelines and signposts to indicate that progress is being made.

Will everyone be happy? Certainly not. Developers and the associated support industries do better selling outrageously priced houses and condos to the extremely wealthy, and that wealth is also the source of campaign contributions feeding politicians at both the state and county levels. 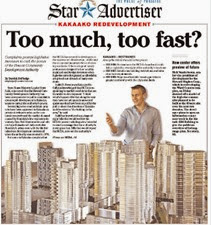 To get the pipeline filled with affordable housing will likely take a decade or two. We don’t have much experience in how to do it. It will go better if citizens are allowed to do their own urban planning with the support of architects and other experts. See “Charrettes” as one path to citizen participation in urban planning (1/25/2014). Read the article. If we don’t involve ourselves in urban planning, we’ll just get more housing for the rich. Since the HCDA has proven to support only unaffordable housing, it might be good to abolish that organization and replace it with one that serves the people.

So far, the ordinary citizen’s voice has not been heard. We need to change that.

FACE is on the right track, and I hope they continue to lead in the struggle. Unlike the city, the leaders of FACE are good listeners, and they have a huge constituency.

I hope they will take a leadership stance and ask their congregations if they want affordable housing in Hawaii. If they hear the expected resounding “Yes!” then they can continue to be the catalyst that we need to make change happen.