“
“One month they took all her toys. It was so sad. She would say where's my toys mommy? What was I supposed to tell her. Every since then, she does not like rubbish trucks.”—mother of 3-year old Thalia Martin quoted in Hawaiinewsnow.com Opponents protest against sit-lie expansion bill
” 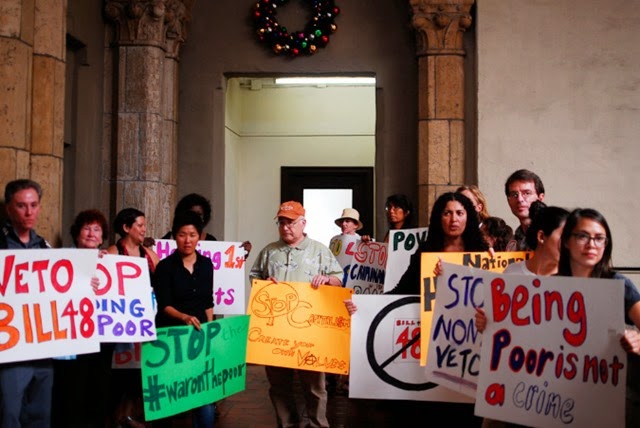 Advocates and allies joined forces with homeless families yesterday in a noontime rally at Honolulu Hale protesting Bill 48, a measure that has already passed the Honolulu City Council and is awaiting Mayor Kirk Caldwell’s signature. The bill would expand the city’s new sit-lie ordinance to many other areas of the island of Oahu, potentially criminalizing those caught napping by police.

Those caught sitting or napping may be cited, and if they fail to show up in court or cannot pay their fine, they could end up with a criminal record. That is, if they are homeless, since the ordinances enacted by the city are aimed squarely at the homeless, which is to say, the most vulnerable among the poor in Honolulu. It is unlikely that a senior citizen, for example, falling asleep at a bus stop, would be cited. The Mayor has been clear that his program of “compassionate disruption” is aimed only at the homeless.

Mayor Caldwell’s office told Disappeared News that he is waiting for an opinion from the city’s attorney before signing the bill. 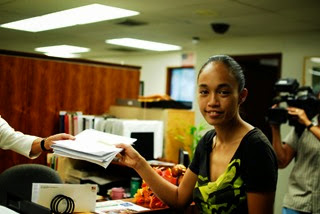 Tabatha Martin, mother of Thalia Martin, hands over a petition with 1,199 signatures at Mayor Caldwell’s office. The Mayor himself was out of town. 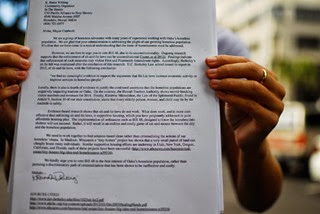 (Photo credit: Thanh Bidwell)
[Hawaiinewsnow covered the rally—see their story and video here. It’s a well-done interview with good video—click and check it out.]