Update: at 1:30 p.m. HST, the tweet came in: Not Guilty. This is after a 25-hour trial and 5 hours of deliberation, including one juror excused because of fear of retaliation.

I’m checking Twitter every few minutes to see what happens in Austin Texas (isn’t technology wonderful?) in a case that went to the jury this morning. I learned about it on today’s Democracy Now. The final segment described the trials of Antonio Buehler, who was photographing a woman crying out for help during a DUI arrest.

A cop came over to him and ordered him to put his hands behind his back, which of course meant that he couldn’t video what was going on. Today’s trial will determine if Buehler is convicted on a petty misdemeanor charge of "failure to obey a lawful order," but effectively, it is about whether he has the right to photograph police activity.

Hawaii has had its own incidents (for example, here) (more here, here and here) that didn’t get onto Democracy Now even though the police victim (the photographer) was severely beaten, and the police caught in a big lie. 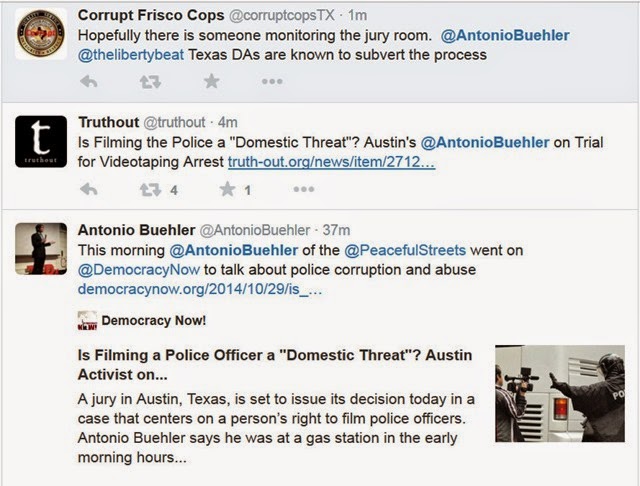 To watch the complete segment on Democracy Now, click here. A full transcript is included.