Homeless advocate Kathryn Xian searched the streets, back and forth, in the heavy rain until she located a houseless couple who had been thrown out of an emergency 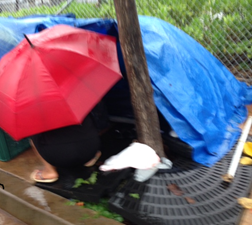 shelter without a place to go and without transportation—by Hawaii Red Cross staff who were operating the Farrington HS shelter.

She found them, huddled under makeshift shelter, trying to stay dry, and took them off to safety.

It was a dark and stormy day. Hurricane Ana was retreating but not gone. She drenched Oahu with rain as she made her way toward Kauai and Niihau. Weather reports warned that thunderstorms and winds were possible until Ana was gone.

By no stretch of the imagination was the storm over. Flood warnings continued through the day until 8 p.m. HPD reported ponding on streets and warned motorists to avoid already flooded roadways.

In response to a Disappeared News request for comment on Monday, this was received Tuesday morning:

Based on the weather information available at the time, a collective decision was made with city and county officials to close the shelter because the main threat from Hurricane Ana was believed to have passed.  We greatly regret that the couple did not have shelter from the rain caused by the storm.  The evacuation centers are meant to provide safe haven for anyone seeking shelter from life threatening disasters.

Whether the shelters should have been closed or not is a peripheral issue here. How a staff charged with caring for those in need can put a homeless couple out on the street without assistance in a storm is something I did not expect from the Red Cross.

Before the next storm, perhaps the Department of Emergency Management and the Red Cross might get together on a protocol to prevent this from repeating in the future.