Let’s recognize what works to remediate homelessness, and do more of it 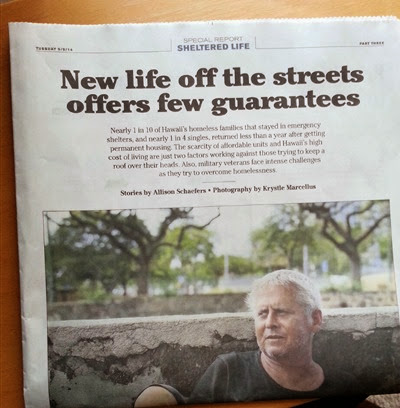 The third and last part of a Star-Advertiser series, “Special Report: Sheltered Life” appeared in this morning’s paper. It’s headlined:

Nearly 1 in 10 of Hawaii’s homeless families that stayed in emergency shelters, and nearly 1 in 4 singles, returned less than a year after getting permanent housing. The scarcity of affordable units and Hawaii’s high cost of living are just two factors working against those trying to keep a roof over their heads. Also, military veterans face intense challenges as they try to overcome homelessness.

If that’s the sub-head, then, where did I get the pull-quote above, which illustrates the same numbers but from a vastly different point of view?

Over breakfast coffee, Nanette grabbed a pen and paper and re-wrote the Star-Advertiser sub-head. She’s a social worker and one who looks for and celebrates people’s natural strengths.

People can be resilient.

What can we learn or deduce from the fact that so many people are helped by moving from shelters into permanent housing? How do we close that 10% or that 25% gap?

2. We should run, not walk, to getting a real Housing First program started.

3. As long as the Mayor and City Council focus on punitive measures, putting their time and effort into criminalizing homelessness, they are not contributing to the solution….

4. … in fact, criminalizing the homeless will only make it harder for them to find and remain in permanent housing and obtain the jobs necessary to stay there.

One might also add, though it’s not implicit in the numbers above, that both the state and city must work to implement policies that work to prevent throwing more people out into the street. These measures might include rent regulation or stabilization, and the restoration of cuts to state mental health services that turn people out onto the streets.

Nor is anyone fooled by Mayor Caldwell’s “compassion.”

As the Civil Beat editorial board posted this morning:

It’s our own failure to provide adequate support to people suffering from financial crises, mental illness, alcoholism or drug addiction that is at fault here. Without adequate treatment programs, counseling and housing alternatives, the sit-lie bills offer the bleak prospect of more homeless people going to jail and accruing fines that they can’t pay.

What’s “compassionate” about that?

There’s much more to be said, of course. Please read the Civil Beat editorial in its entirety, and note, at the bottom, who it is that is speaking.

Homelessness is a complex issue, and Honolulu is not alone in facing the numerous problems that need to be solved. It is unique, perhaps, in its sloth in getting started with evidence-based solutions, which has resulted in a problem finally grown too big to be ignored.