Does playing football damage brains and contribute to domestic violence?


“
America is a football crazed nation, yet the long term affects of what takes place on the field have been mostly overlooked.--Dr. Amen: Momma Don’t Let Your Babies Grow Up To Be Football Players
”
“
If you began playing football in high school, the doctor says, you have a higher risk of suffering health problems involving the brain later in life. Among the ailments that may be linked to football is chronic traumatic encephalopathy, a progressive degenerative disease associated with repeated brain trauma. Symptoms, which may occur early or years after a brain injury, include dementia, memory loss, aggression and depression. Amen has also found violent behavior, obesity, mental illness, and suicide statistically common in populations of former players.--Daniel Amen, Newport Beach Brain Doctor, Says NFL Must Get Its Heads Examined
”

This is not something I follow, but I do wonder if people are checking into the possible (likely?) concern that repeated violent head banging in sports can lead to 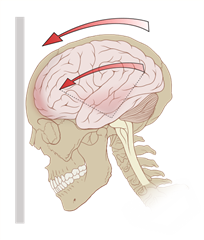 brain damage that in turn increases violence including domestic violence. And if so, what to do about it?

Football seems to depend on increasing violence. Isn’t that what the fans are cheering for, what drives patrons of sports bars into shouting frenzies across the country? So if the sport itself leads to “conditioning” the brain for violence, why would the NFL ever intervene?

Aside from psychological conditioning, banging a soft brain repeatedly against a hard skull can damage areas responsible, for example, for impulse control.

The two pullquotes above are a bit old. I attended a talk by Dr. Amen long ago in Honolulu. He is interested not only in detecting and preventing brain injury but in remediating the harm caused that otherwise would be long lasting. 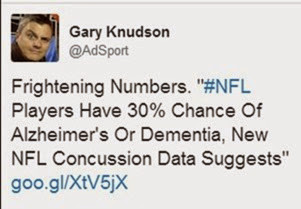 Dr. Amen showed us colored SPECT scans that were very scary—not just of brains damaged by physical injury but also by drugs. and of brains eaten out by Alheimer’s.
There were some similarities in the pictures: areas of the brain that were no longer functioning appeared as dark holes where there should have been activity.

Can we say that the player who knocks his domestic partner unconscious has not been aided and abetted by the purveyors of NFL violence-for-profit? (And what about the health of her brain??)

If football is the national religion sport then shouldn’t we all be calling for reform?

Sure, I know, it’s not very likely. But that’s not a satisfactory answer.