I wrote testimony which I will present to the City Council this morning on the series of punitive bills that would criminalize homelessness in Honolulu. It occurred to me that it would also make a decent article for Disappeared News.

I’ll also be telling the City Council committee members that several of them, as former legislators, are very familiar with how our state government works, and because both the city and state are interlocked on the problem of how to alleviate homelessness, they might walk across the street and try to push the state into action (as opposed to working groups and meetings). In particular, the state bears responsibility for dumping people onto the street by cutting mental health services. Replacing these services is a state responsibility, and the city government could give them a few nudges to get busy on that.

The article snipped from the web below—indicating that tourism in Hawaii is booming—did appear in this morning’s newspaper, hidden away on an inside page. Strange: complaints about homeless people in Waikiki rate front-page news but when tourism turns out not to be affected, the story gets tucked away.

Sure, one day it could be impacted, a very good reason to deal expeditiously with both the city and state inaction that brought us to the current crisis, and (related) a darn good reason to install and maintain public toilets for both tourists and for the rest of us.

The negative effect on tourism is unproven and unlikely

First, it's important to note that, despite newspaper articles and complaining letters to the editor that the editors select to print, tourism is not being hurt by what the editors consider to be a nuisance. In fact, both arrivals and visitor spending are up significantly. The story snipped below should be in Thursday's paper: 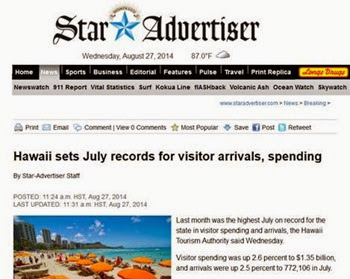 So whatever pressure is being applied to you by those who say that the appearance of homeless people on the streets of Waikiki is hurting tourism, there is no evidence of this and so there is in fact no urgency and the Council should refrain from taking precipitous action in response to a problem that doesn't exist.

The availability of Housing First units in sufficient numbers would begin the process of moving people from the streets into permanent shelter. At present, there is no such housing available and none in the near term, especially in the quantity required to do the job. Providing this housing should be the first priority of both the City and State, rather than futile attempts to clear the streets by enacting punitive ordinances.

There are also no RFPs or contracts let to provide the wraparound services that go along with the Housing First or other evidence-based programs to combat homelessness. Punishment is no substitute for supportive services, and the entire process, from policing through to enforcing the ordinance against countless individuals simply runs up the bill for taxpayers while benefiting no one.

Advancing the effective date to January 2015 does not help. Will there be housing in 2015?

Passing bills that criminalize homelessness would be precipitous, damaging to those individuals who will be harmed instead of helped, and costly to taxpayers. Instead, both the City and the State should redouble efforts to create Housing First capacity, followed by wraparound services, and at the same time take measures to keep people currently housed in their homes. Particularly low-cost rentals, but any rentals, should be available under a regime of rent control or stabilization in order to minimize the number of people forced out to the streets.

Both the City and State should move to reverse the cuts to mental health services that dumped people onto the streets starting roughly in 2007. The state Department of Health bears a great responsibility for increasing the homeless population by cutting ACT services and reducing intensive case management from as much as 30 hours a month to a maximum of 3 1/2 hours. There is sworn testimony given to a committee of the Legislature in March 2010 that the number of deaths increased 36% one year over the next, and it follows that there was also an increase in homelessness, although no numbers are available. The DOH also attempted to close clubhouses and has turned people away from the clubhouses, which left many individuals without support of any kind.

While the provision of mental health services is a State responsibility, the City incurs expenses when those in need of the services end up on city streets. Punitive ordinances will not assist these people, and arrests will only make their situation worse and run up higher bills for taxpayers.

There is nothing in these bills that assists people in moving into or staying in permanent housing. That is where the legislative and administrative priority should be placed. As people are moved from the streets into housing, the problems that these bills seek to remedy will disappear.

If one must make an economic argument, it has been shown, and you no doubt are aware, that it is far cheaper to create a Housing First solution than to leave people on the streets.

So by fiddling with these bills, the Council is wasting my money and the money of every other taxpayer in Honolulu. Instead, please place your energy in accelerating Housing First and other evidence-based solutions that move people into permanent living situations and then wrap them in the services that will help them stay there.