“
I hate housework! You make the beds, you do the dishes and six months later you have to start all over again.—Joan Rivers
”

I hate having to do the same laundry week after week, and vacuum the carpets again and again…but I do it. Heck, I used to be a mucky-muck executive at a major US corporation, and now I have to clean windows?! Sheesh.

If one owns a house, someone has to clean the rain gutters and repair screens, siding, and so forth. That’s a private responsibility, more or less honored by personal whim. But when public facilities are involved, their upkeep affects all of us and we expect the bureaucracy to do its job.

Honolulu is supposed to be “paradise,” but our fair city is quite willing to let things rot by shirking its maintenance responsibilities. Many public facilities are in a disgraceful state of disrepair—as the Governor admitted in his 2011 state of the state message.

I thought it was sad to see Occupy protestors wielding buckets and mops which they used to keep nearby Thomas Square Park public restrooms clean, since the city wouldn’t do it.

Yesterday’s paper had two articles related to city neglect of its fundamental responsibility to keep things in good repair for its citizens. The first reported that a badly neglected park has been rescued (for now) by a developer. The second article reported the decay at Hanauma Bay, which happens to both be a top tourist attraction and which derives funds from fees that should be enough to keep the place in good repair.

Stanford Carr, developer of a condo next to Mother Waldron Park in Kakaako, has undertaken repair and reconstruction of the park, which, like others, has been neglected by the city:

Mother Waldron Park was not in the best of conditions, with a broken irrigation system, a lot of old asphalt, two unused volleyball courts and one overused basketball court that was in "bad shape," Carr said. "So we tore it all up and reconfigured it."

The old asphalt was removed and new turf put in. The volleyball courts were removed. New shower trees and indigenous shrubbery have been planted along the perimeter of the park, and all new irrigation lines were installed.

"When we unveil this in a couple of weeks, it will look like a very nice, well-maintained park," Carr said.

But how long will it look like “a very nice, well-maintained park” when the city is responsible to maintain it and neglects to do so?

The Hanauma Bay article gets right to the point:

For two weeks last month, the bathrooms at Hanauma Bay had no paper towels.

The copper flashing on the roof of the lower restroom was stolen in 2006. It has yet to be replaced.

The article notes that Hanauma Bay is not the only city park that is poorly maintained—what is different is that admission and parking fees should have covered the cost of maintenance, and yet the facility is in disrepair. The article pointed to $6 million in annual fees collected at the park.

Even when funds are there, the Honolulu city administration has allowed a public facility to fall apart.

My own little anecdote: when the sidewalk tents still stretched from the Nuuanu Stream in Chinatown to Aala Street and beyond, a group of foreign tourists “knocked” on a tent flap to ask the occupant where was the nearest public toilet. I couldn’t hear the response completely, but it sounded like they were directed to Aala Park with a warning that the toilet was really filthy…

Of course. This is Honolulu. The public toilets (when you can find one) can be really filthy.

The “we don’t do housework” malady may be broader than just a city thing. Recall that the University of Hawaii is happy to put up new buildings but won’t maintain what it has, to the tune of a more than $400 million maintenance backlog.

At the state level, similar neglect by the Department of Education, operating a state-wide school district, resulted in a repair backlog that reached as high as $640 million (in 2001).

The state legislature has funded some air conditioning installations at several priority schools, but will they maintain those units after they are put in place?

Neglect of housing repairs has lead to class action lawsuits

Remember that the residents of Mayor Wright housing went without hot water for years because the solar systems were installed but not maintained and ceased to work.

Imagine that you had to take cold showers for years. Just think about that for a moment.

Hark back to the elevator debacle at state-maintained (I should put that word in “quotes”) public housing:

At Kalakaua Homes, one of two elevators serving hundreds of residents has been out of service since March 19.

That’s three months during which the state held that parts were not available. Advertiser reporter Jim Dooley picked up his phone and easily found the parts, no problem. Even then, the state said that it would not yet repair the elevators, and that it could be three months until service was restored.

Reading on in the story:

The neglect at Kuhio Park Terrace resulted in two class action suits against the state, one alleging breach of the warranty of habitability, and the other alleging violations of Title II of the Americans With Disabilities Act and Section 504 of the Rehabilitation Act regarding barriers to access and failure to provide reasonable accommodations. The cases resulted in settlements.

To have achieved that 90% in 2008 Hawaii would have had to have neglected road maintenance long before the latest recession provided an excuse for “deferred maintenance.”

My own personal measurement of neglect is the condition of the streets that I regularly walk or drive. For years I’ve documented disappearing white paint in crosswalks or on major roadways and contrasted this with other places where crosswalks are kept in immaculate condition. 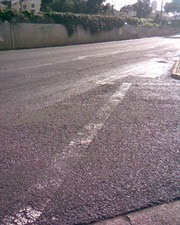 This snap of a disappearing crosswalk in Kalihi taken in 2008. It later disappeared entirely. 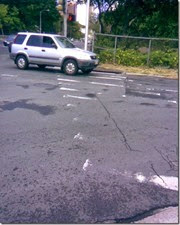 Here’s another file picture. A driver in the second lane might not know it’s a crosswalk at all. The faint marks you can still see later disappeared totally. 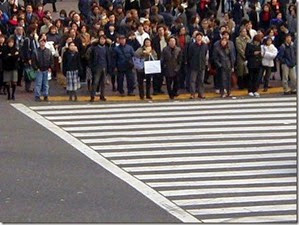 What do I expect? This snap shows pedestrians waiting for a light to change on a street in Shibuya, Tokyo, a heavily used crossing. Yet the paint is (and always is) immaculate.

A broken and decaying sidewalk outside of the Nuuanu YMCA parking lot has been allowed to crack for years without repairs and is a clear hazard to anyone in a wheelchair or scooter. I posted snaps of parts of the sidewalk in this 2008 article. The sidewalk has continued to deteriorate to this day. That article was posted to show that neglect of sidewalk maintenance can result in lawsuits—which, of course, are paid for by taxpayers like you and me.

[Aside: The media doesn’t usually track sidewalk injuries to pedestrians. There seems to be excitement only when someone (often a senior citizen) is killed while crossing the street. I can see that taking pictures of crumbling sidewalks would not be sexy enough to sell newspapers, but it might be a great assignment for a reporter the paper wants to get rid of, for example. Perry White to Clark Kent: “Go out there and bring me 50 photos of crumbling sidewalks.” Even Superman might quit. Perhaps there is a better way to get the streets fixed than waiting for media attention.] 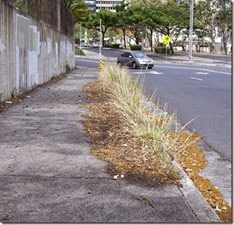 This was snapped a few years ago just a block mauka of Beretania St. Does the city have no shame? Grass taking over the sidewalks like this is not at all unusual.

Deferring road repairs (or other maintenance) leads to higher costs later, perhaps including replacement of the facility. We all know this. The city and state administrations know this. So their failure to budget lifetime maintenance is a serious neglect of duty.

By “lifetime maintenance” I mean to recognize that at some point, roads, even buildings, may need to be totally replaced. Many things have a lifetime, whether long or short. But during that lifetime, responsible government administration requires that maintenance be included in the budget.

For example, if the UH is eager to put up new buildings, then it should be required by the legislature (since it can’t figure this out on its own) to include projected maintenance costs for that building in its budgeting. If it can’t afford the upkeep, then it’s better to wait or skip the construction. Perhaps it does this, but then, how to explain the backlog that it has allowed to accrue?

Would it really hurt our city and state governments to take proper care of this beautiful spot on the planet? I don’t think so.

“
Housework can't kill you, but why take a chance?—Phyllis Diller
”