Ian Lind discovers yet another defective financial disclosure, this one at the top level of state government

Who is Bruce Coppa?

Bruce Coppa is Governor Abercrombie’s chief of staff. In that position, he also holds the title of administrative director of the state. He’s the top appointed administrator in the executive branch.

And what’s of interest in his filing?

Ian’s eagle eye noted that this disclosure form indicates a sharp increase in high-end real estate sales, even while Coppa was serving in this key role in state government. On his financial disclosure form Coppa entered an “E” in the income category for Hawaii 5-0 Properties, Inc.

But Ian also reported that Coppa failed to disclose his state income on the form.

At the bottom of the form is a signature block

CERTIFICATION: By checking this box or signing your name on this form, you signify and affirm that you are the person whose name appears as the "Filer” above and the information contained in the form is true, correct and complete to the best of your knowledge and belief. You further certify that you understand that there are statutory penalties for failing to report the information required by Hawaii law.

The State Ethics Commission was “troubled” by Senator Clayton Hee’s filing of inaccurate or incomplete personal financial disclosure statements over a period of five years or more, but took no further action against the windward Oahu senator.

At first, the Ethics Commission replaced the erroneous filings with amended filings, which effectively obscured the issue, but soon posted both the originals and the amended forms. No further action appears to have been taken, so far as the penalties, at least.

Several months later, I posted three more situations (no doubt there are more, this was just intended as a sample) of disclosures which omitted income or even mentions of employment. 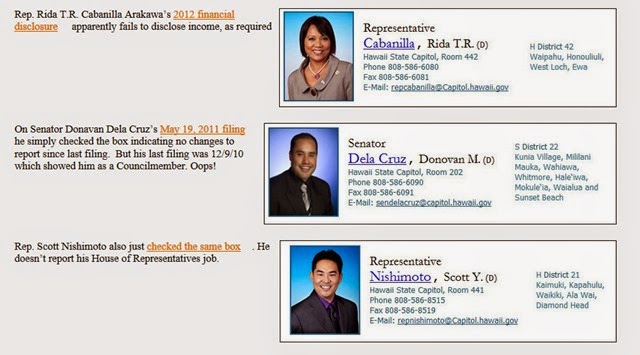 Noting the silence from the Ethics Commission, I checked their web page at intervals and posted articles noting that no amended forms had been filed.

So we have a law that is intended to produce transparency in government and act as a watchdog against abuses--which can simply be ignored. In other words, de facto, no transparency.

Ian was left to wonder in his current article:

I have to wonder when Hawaii’s top administrative officer finds the time to not only continue, but apparently expand his personal real estate activities?

And, yes, I do wonder about whether any of the business steered his way creates potential conflicts of interest?

What else might be omitted in financial disclosure forms, given that the filers do not have to fear penalties for not reporting? We don’t know. These are Rumsfeld’s “unknown unknowns” and they are possible because accuracy in filing disclosure forms seems not to be effectively enforced.

I know I’m not making friends over at the Ethics Commission by pointing out these issues. I also am aware that they may not have the budget to do all that is expected of them. On the other hand, letting another politically powerful officeholder escape the Commission’s authority would demonstrate that its authority is ineffective.

Does the statute need repair? Is there any reason why it is not being enforced? Where is the Commission statement on this? Isn’t some reaction to its inaction called for?

Nevertheless, we have a statute and officeholders are subject to it: “You further certify that you understand that there are statutory penalties for failing to report the information required by Hawaii law.”

But the message is that unless caught by a blogger, no one will know about what has been intentionally or unintentionally hidden from the public, and even if caught, it really doesn’t matter at all.

So Ethics Commission, Ian’s done the sleuthing, now over to you.

This starts to get at what's "wrong" with the new expanded disclosure law everyone is quitting over (don't let the door hit you in the a** on the way out).
The law doesn't make it any more likely that the ethics commission will find anything- they got the information before. What this means is that we unpaid citizens-bloggers-journalists are now responsible for catching the crooks. Do we need a badges?