“
It all adds up to a growing problem that demands a multi-faceted strategy to solve. The time has come for Honolulu to enact stricter anti-loitering laws, which, coupled with expanded social services and greater access to affordable rentals under the Housing First model, should propel real headway on an intractable issue.—Star-Advertiser editorial 6/18/2014
”

There is a perhaps widespread belief that new laws are the answer to social problems. Unfortunately, that doesn’t work. Social action is usually the way to solve social problems.

We have plenty of laws. See how effective traffic laws are as you watch cars routinely ignoring them as they careen around pedestrians after failing to stop on a right turn on red.

The pull-quote is from today’s Star0Advertuser editorial, ‘Sit-lie’ bill a good beginning (Star-Advertiser p. A13, 6/18/2014). It’s very worth a read, if you are a subscriber. If not, see if you can find a copy of today’s paper.

And there’s really nothing wrong with it, is there? No. And yes. What’s wrong is that the expanded social services and Housing First apartments are not in place, but the punishment is, and they are advocating more punishment.

What is it that people don’t understand about Housing First? That’s Housing FIRST. So far, especially from the city, we have only talk and no housing. But passing laws is easy, they do it all the time, and costs nothing. 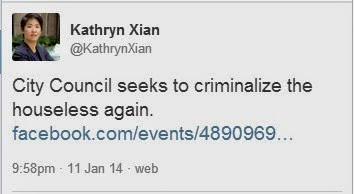 To pass new laws and further attack those forced by city ordinances to live on sidewalks amounts to inhumane punishment if they have no alternative.

It’s worth reading the editorial in its entirety, but one more snip related to the proposed new laws as a solution:

Seattle's experience is instructive. The sit-lie ordinance alone did not compel much improvement; the vast majority of homeless people issued civil citations simply ignored them and defaulted on the fines, according to the Seattle Weekly.

That experience should be a hint.

Also, without a way to keep people in their rental homes or apartments, more individuals and families will find themselves without shelter. And without public restrooms because Honolulu refuses to provide those facilities. So predictably, the sidewalk nuisance problem will continue.

There’s no new law planned to halt or limit rent increases or provide rent stabilization. Passing punitive laws seems easy for our city government, but analyzing and working on mitigating the causes of homelessness in Honolulu seems not to interest them.

Here’s a question for the Star-Advertiser’s Big Q daily question: “Should we applaud, or should we punish the City Council and Mayor for lying down on the job with regard to reducing homelessness in Honolulu?

Until evidence-based solutions are actually put in place, taxpayer money is being wasted, people (including families and children) continue to suffer, and Hawaii’s reputation, if there is anything left of it, as the “Aloha State” remains in jeopardy.

Would these restrictions and actions include Hawaiians, I would like to ask the great ʻlawmakersʻ.
This is not to advocate discrimination but look at it as if a houseless Hawaiian was on private land. Yes, being cited on public land for Hawaiian, it is as private land because essentially the land belongs to them. Therefore they are exempt and I hope NO idiot like the sledgehammer clown will overlook this fact.