“
The national 100,000 Home Campaign recently announced that it had reached its six-figure goal of helping more than 230 communities house chronically homeless Americans, including 720 people in Santa Clara County.

”
“
Jerry Jones, the Executive Director of the National Coalition for the Homeless stated in the New York Times that, “Mr. Caldwell’s ‘compassionate disruption’ was ‘a pretentious phrase to dress up an ugly policy — sending the police to round up poor people isn’t compassionate.’”
”
“
The 100,000 Homes Campaign is touting an 84 percent success rate of people not returning to homelessness and a cost savings of $1.3 billion.
” 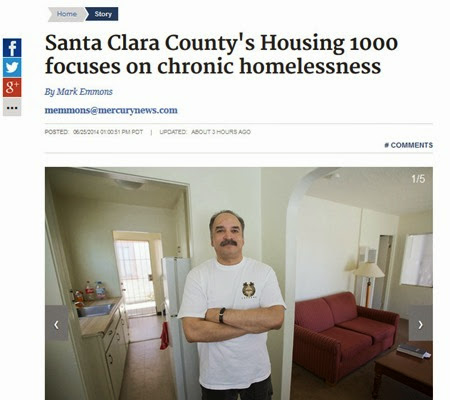 An article in today’s San Jose Mercury News celebrates the success of their homeless solution, which resembles Housing First.

The idea, both nationally and locally, has become to get these most chronically homeless into housing first and then provide them with intensive support to stabilize their lives.

The 100,000 Homes Campaign is touting an 84 percent success rate of people not returning to homelessness and a cost savings of $1.3 billion.

"It doesn't just make moral sense, but it also makes business sense," said Beth Sandor, director of quality improvement for the campaign. "People understand now that this is smart because it saves money. In a place like Santa Clara County, where there is such a density of homelessness, the cost of doing nothing is just enormous."

The Honolulu City Council just doesn’t get it. Tomorrow (Thursday) they will hear three bills designed to criminalize homelessness. Note that one ordinance after another has been applied first to force people onto the sidewalks and then to criminalize them for being there. Honolulu still has no alternative housing. Honolulu still has no regulations in place to stabilize or control rent increases that force people out of their homes.

From a Pacific Alliance to Stop Slavery Facebook page:

On Thursday, June 26th 2014, at 8:45am the City Council seeks to approve three bills aimed at criminalizing the houseless without any implemented alternative for housing.

Link to bills, how to submit testimony, and talking points below.

Honolulu’s plan is both cruel and unworkable. It is a huge waste of taxpayer money and runs the risk of damaging the crucial tourist industry.

The City Council has ducked the housing cost issue that afflicts more and more residents each year. Increasing poverty means more people on the streets—children, families, the chronically homeless. Cruelty and punishment won’t solve the problem, and if Honolulu does make #1 on the Meanest Cities list, that won’t help tourism either.