Should VA Secretary Shinseki resign? The answer is important but not simple

Should Veterans Administration Secretary Eric Shinseki resign or be fired after revelations that many veterans have died waiting for healthcare appointments, and that VA hospitals falsified records to hide appointment delays?

Maybe. Few things in life are simple, and while resigning to take responsibility might be a dramatic gesture, this is America, and not Japan, where such resignations are culturally expected. Perhaps because I lived in Japan for so many years, my first reaction was, indeed, that he should resign.

Dysfunctional government is a cliché. What this scandal reveals is yet another aspect of the larger dysfunction, which is not limited to the VA’s problems. We need to get better at efficiently and doggedly replacing what doesn’t work.

A little research (sigh, Google makes it so easy, why don’t the rest of the media just Google before they print?) reveals that Shinseki has been working on the problem but appears to be stymied at every turn. See below.

Hawaii’s politicians are weighing in, but they,  too, are embedded in the problem, while the solution remains elusive. In an op-ed in this morning’s newspaper Governor Neil Abercrombie strongly defended Shinseki both as a son of Hawaii and for his accomplishments leading the VA (snip):

If or when misconduct of any kind occurs; if standards are breached, such isolated failure should not be allowed to obscure the daily roll call of outstanding service to veterans that is the hallmark of Eric Shinseki's tenure…
…
Let us not let the negative actions of the few block our vision of this dedicated servant of our nation and the good works he has done and will do in the weeks and months to come.

The Governor did describe the size of the VA health care operation and provide a short list of Shinseki’s accomplishments as he saw them, which TV and other accounts have omitted—see Abercrombie’s full statement in the paper.

See also the more detailed discussion in Civil Beat by reporter Chad Blair, which, not limited by the space boundaries of paper journalism, includes Blair’s interviews with Hawaii’s congressional delegation and other lawmakers (Hawaii Lawmakers Speak Out on Shinseki and VA Medical Care Debacle, Civil Beat, 5/22/2014).

Indeed, the disorder at the VA is so pervasive that it would take a superhuman Secretary to overcome them. Nor are the problems limited to one clinic or are they entirely contained within the VA itself. The extent of the problem in Hawaii is not well understood at this point, something our politicians can work on.

To learn more, one had only to pay attention to the ongoing coverage of this issue on Jon Stewart’s Daily Show. Stewart has doggedly covered the VA failures when other media, Congress and indeed the White House, have apparently not been on the case. [He similarly pounded the lack of medical care for first responders to the 9/11 collapse and cleanup, keeping that issue alive for a national audience].

Abercrombie is incorrect in identifying the waiting list/avoidable deaths issue as caused by “isolated failure.“ This sounds like the “just a couple of bad apples” minimization that we’ve become used to when the military is caught i 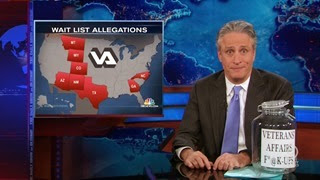 n what are genuinely systemic abuses. Stewart already blew the lid off the line that the Phoenix VA clinic was the only trouble spot on his program of 5/19/2014 by displaying a map of the problem as it was then understood.

To the right is his jar containing expletives—he allowed several loose to punctuate his narrative with the strong feelings not evident in the reaction of politicians or the President (who managed only a lame “mad as hell”). The full 4-minute+ segment is posted below (may contain commercials).

The Navy Times also cited the Daily Show in a January article that highlighted Congress’ entanglement in the problem:

Congress has made it virtually impossible to cut the time it takes for veterans to get the services they need from the Veterans Affairs Department, said former Defense Secretary Robert Gates.

The problem is not money, rather Congress has micromanaged veterans affairs to an extent that any change requires “literally an act of Congress,” Gates said during an appearance Wednesday on “The Daily Show with Jon Stewart.”

“We would try pilot programs where we would try to expedite disability evaluations and things like that … to be able to get them done in 100 or 150 days rather than a year or two years or three years or more, but we couldn’t expand that, once we showed it would work, without a change in the law, and that proved almost insurmountable,” Gates said.

However, another problem is “turf” issues between the Defense Department and VA, Gates said in an extended interview posted on The Daily Show’s website. Gates recalled when he and the VA secretary, retired Army Gen. Eric Shinseki, tried to merge the two departments’ computer systems.

“At the end of the day, Shinseki and I simply could not get the technical people to abandon their turf consciousness and their insistence on owning their own system and not combining the two,” Gates said.

That article concluded with a comment by Gates that touches the issue of whether the administrators of the hospitals on Stewart’s map should be fired, perhaps along with Secretary Shinseki:

“One of the reasons things changed almost immediately was I fired the commander at that hospital, the surgeon general of the Army and secretary of the Army,” Gates said, to applause from the audience. “That got people’s attention. Part of the problem in Washington is the unwillingness to hold individuals accountable for performance.”

Stewart previously skewered the VA for its failure to automate, and that issue certainly impacts the current backlog and coverup situation. The VA will be unable to provide timely care until its data processing system moves at least into the 20th century. The segment below is from the April 4, 2013 Daily Show.

Nothing about fixing the VA is simple. Jumping to conclusions about whom to fire may not be productive. At the same time, replacing those responsible for killing dozens of vets and harming an untold number of other returning soldiers should not be neglected—if there are better people to do the job, the VA desperately needs to have them in place. It also will need resources sufficient to clear the paperwork backlog and turn those claims into doctors visits.

Gates is wrong in that, in the final analysis this is about money, money that congress-, the chief finger-pointers especially- has cut or refused to appropriate to fix the broken soldiers from their idiotic wars. It isn't likely that the reason they had to do this delayed appointment making was that there were plenty of doctors, nurses and clerks but they were all off playing Angry Birds or on he golf course. There just aren't enough medal personnel for all the vets they created.