How Honolulu is killing the goose that brings us golden eggs


“
There seems little sense of urgency in Honolulu Hale to match the deplorable conditions on the streets in Waikiki. …

HOMELESS PEOPLE have been reported as defecating and urinating in streets and hotel gardens, stealing towels and other supplies, panhandling and blocking access to parks and beaches. The slowdown in tourism traffic largely has been attributed to rising airfare and hotel costs making Honolulu less competitive among destinations, but anecdotal reports about homelessness in Waikiki — and the word has gotten around, via the Web — surely isn't helping.
…
Whatever the range of tools Honolulu can assemble, it had better include one more element that's been in short supply: political will to tackle this problem.—Star-Advertiser p. A11, 4/23/2014)
”

It can be done—except in Honolulu??

“
With the help of national organizations like the 100,000 Homes Campaign and the Rapid Results Institute, Veterans NOW set out to get 225 homeless veterans, including 80 who were chronically homeless, into housing in just 100 days. The 100-day metric is a clever approach in a campaign like this because, as [Adam] Rocap [, chief program officer at a local homeless services provider] explained, it’s “long enough to do planning but short enough to be motivated and see measurable results.”

On Thursday, Veterans NOW released its initial results. Despite setting such a lofty goal, in the 100 days between August 9 and November 30, it was able to get 207 veterans into homes, including 96 chronically homeless vets.
”

So what is wrong with us here in Honolulu? From the pull-quote above, you might assume it’s lack of motivation.

(read the rest of this short article here)

It’s one thing to rant on a blog that Honolulu’s continued neglect of its homelessness problem can negatively affect tourism, the driver of our economy—and another to see it in print in the commercial press.

Today’s Star-Advertiser editorial is spot on. Neglect of programs to assist the homeless may already be negatively impacting tourism.

Now that’s fine, but it’s a shame that we don’t also see an outpouring of compassion (also called “aloha”) in the “Aloha State” for those forced to live on the streets or beaches.

The “problem” has gone on long enough, the editorial hints. The effects are being felt.

Honolulu Hale (our City Hall, for out-of-state readers) has public toilets. Our mayor and city councilpeople use them all the time. The rest of us have to be sure to pee before leaving home, because there’s no place to go if you’re downtown unless you can make it to (for example) the State Capitol. When Macy’s closed on Fort Street Mall, it created a public toilet crises for both residents and visitors.

Perhaps city councilpeople just don’t understand that by refusing to confront Honolulu’s toiletlessness problem, they help to kill the golden goose that is tourism in Hawaii. 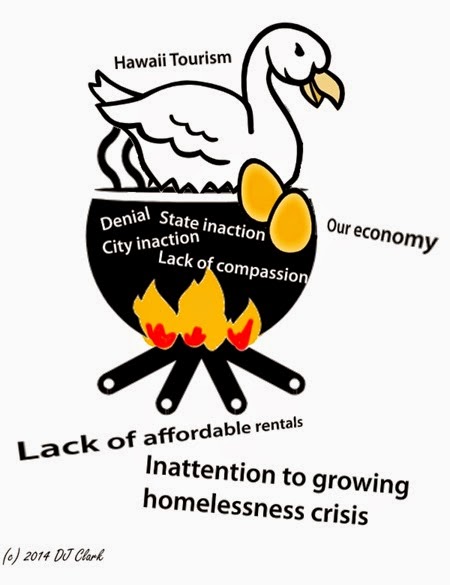 Tourism is all that separates us from becoming an obscure island in the Pacific Ocean trading with stone money.

How many letters to the editor will it take to convince our leaders that they need to put the pedal to the metal and put in place measureable solutions?

I would love to read in the paper that 300 people have been housed or that 10 public toilets have been installed downtown.

The Star-Advertiser editors are on the money (or lack thereof…) by observing today:

… the Council seems hesitant to embark on a full-scale launch of a homelessness initiative patterned after successful "Housing First" programs elsewhere. Its response to the administration's request for $3 million was to cut back funds needed to get the program going.

There seems little sense of urgency in Honolulu Hale to match the deplorable conditions on the streets in Waikiki.

As the boxed quote above right illustrates, one can move faster. Certainly, it’s hard to imagine moving more slowly than our state and city governments. It should be noted that many states and municipalities began their “end homelessness in ten years” program about a decade ago. We have yet to get started. But it seems we’re good at complaining.

On the state level, while not as reluctant to spend as our city “fathers,” Housing First and other initiatives remain in the future. At a recent task force meeting a Mainland speaker provided valuable information, but the mental health services described to assist some people in successfully remaining in their apartments are still but a dream. Contracts have not gone out to bid that I am aware of.

So we can look forward to more letters to the editors and editorials. The news media could do everyone a service by halting their dehumanization of those forced to live on the sidewalks. Here’s a tweet in reaction to a KHON news story:

One day, though, things could snap…

The faddishness of the Japanese consumer market

To the extent that tourism still depends to a large extent on the Japanese and Asian markets, it is vulnerable to the fads and fickleness endemic in Japanese consumer culture.

There is plenty out there for the Googling on  psycho-cultural perspectives on Japanese consumer preferences. Of course, television and print advertising will continue to influence consumer choices, including pushing travellers to vacation or get married in Hawaii, but there are other influences at work that are perhaps not appreciated on this side of the pond. The Hawaii ads support an ageing tourist destination. What exactly is new here, anyway? Mostly some new restaurants, but Hanauma Bay and so forth remain the same. So Hawaii, as a tourist destination, could be vulnerable to any new fad. Negative press or Internet reports would increase that vulnerability.

While a major Japanese newspaper (and the Japanese remain voracious readers) may choose not to expose Honolulu’s traffic, construction and homelessness problems, the same can’t be said for the shukanshi (週刊誌), or weekly magazines and tabloids. The newspapers may have the good sense to protect their outbound tourism ad revenue, but “good sense” cannot be used in a sentence referring to many of the shukanshi. These publications thrive on sensationalism and scandal.

Just imagine a story documenting someone’s bad trip to Honolulu—how they had to ask a person living in a tent on the sidewalk for directions to the nearest public toilet, or report how they missed their flight to the airport due to miserable traffic on the H-1. How they couldn’t see the moon between Waikiki skyscrapers. This category of media thrives on excess and would bring out the worst, if that’s what they had a mind to do. It doesn’t even matter terribly if the stories are true.

Should one such story be picked up by other publications, we in Honolulu could feel the impact. The fickleness of the Japanese consumer could help an unscrupulous promoter to shift tourist interest from Hawaii to some “magical” lake in China, for example. What better way to promote the lake for weddings than to knock Hawaii?

I am not making this up. There are articles and letters in Japan and Asia already. Example:

[The Google translation, such as it is (sorry)]: From what the U.S. flower-shaped paper, 僑報 (electronic version) said as news of the local paper, there is no public toilets in the Chinatown of Honolulu, according to Mr. Guo of the Chamber of Commerce president, this area is also smell a filthy from "In the past terrible" state. Mr. Guo has said, "it is also to blame there is no public toilets as well. Hawaii such as the success of the APEC, we have a lot of great things. Yet, it is laughable toilet problem of Chinatown even Nantes can not be resolved" he said.
Drive for public toilet installation has been carried out for several years in the Chinatown of Honolulu, but does not progress at all."The trouble toilet is close to take a year. Owe the toilet of the alternating reluctantly now. Several hundred spectators had come to borrow a day there," said 80-year-old woman who had come to play appeal.

[xinhua.jp, A public toilet in Chinatown in Honolulu? 「急にもよおしても駆け込むところがない」と不満の声続出―ハワイ After another voice of discontent "where you rush even if events suddenly there is no", 1/17/2014]

Note that Xinhua is a Chinese news agency, posting this article in Japanese for a Japanese audience. All that’s missing is a companion article on how pleasant it would be to visit that lake in China instead of suffering indignities in Honolulu.

I’m not saying such a thing will happen, but it certainly could, and our government’s failure to keep Honolulu in good condition would feed into that unfortunate scenario.

Call it insurance. Economic insurance. Probably it has these aspects to it:

If we need to replace some city councilpeople or state legislators who believe that cruel, negative and punishing tactics are the way to deal with the housing/homeless situation, we can do that too.

Or we can wait, and the hotel industry will react as soon as it realizes what it needs to do. But that won’t put food on our table or help pay our outrageous electric bills.

Instead of building mental health services, Hawaii has slashed them

The services mentioned by the invited speaker included ACT (Assertive Community Treatment) services, which are complex to initiate. Hawaii slashed its ACT services, probably resulting in an increase in homelessness and deaths (see: Article misses the point—state cutbacks caused deaths and increase in those on streets with mental illness, 9/1/2013). One can confidently point the finger at the state government for significantly worsening the homeless crisis by cutting services that served the community.

There’s a lot to put in place for a Housing First program, and how fast are we moving? Here are two slides from the invited presentation that I snapped in the dark at the February group meeting. They illustrate the complexity of properly supporting a Housing First initiative. Are either our state, or our cowardly city council, up to the task? 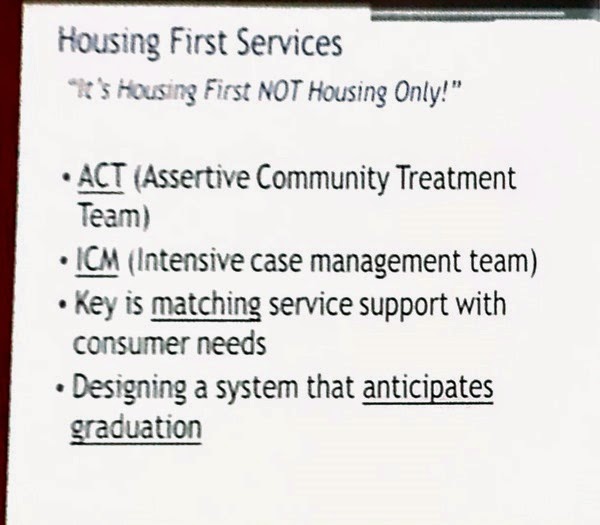 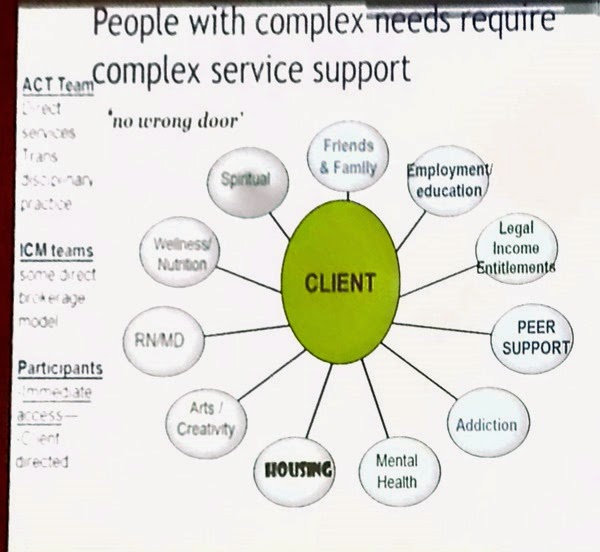 Note the top slide: “It’s Housing First NOT Housing Only!”

How far along has Honolulu progressed in putting this together? If the media would be honest, to start with, and turned their cameras on our lawmakers instead of the tents on the streets, and if we then held our government responsible, perhaps one day the letters to the editor would stop. Tourism would be strengthened. People in need of housing would be housed. And perhaps we’d all have a place to pee when we’re downtown.

(Note: though I’ve not discussed keeping people who have homes or apartments in their homes—that needs work also).