Yet another state senator’s fundraiser run by prominent GMO lobbyist 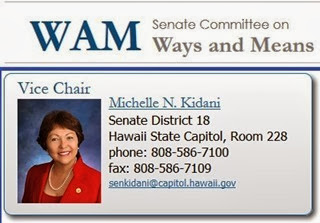 Senator Kidani is Vice Chair of the important Ways and Means Committee. WAM is a “terminal” committee—after the “subject matter” committees hash over a bill, WAM determines whether it should be funded. Can Hawaii afford it? How does it fit in priorities? WAM is often the only Senate committee to determine if a bill will live or die based upon budget or need considerations.

As I’ve pointed out, it seems perfectly fine to have anyone on the planet run a legislator’s fundraiser. It seems also that Ms. Maluafiti must have a talent for it, she is in such demand among Hawaii senators. No, don’t read anything into that, I’m being quite sincere. The problem rests with the senators who, having chosen a prominent lobbyist to cozy up to, are in a decision-making capacity of any kind with regard to the issues that the lobbyist seeks to advance.

When a lobbyist is so closely associated with a hot and important issue such as GMO or pesticide regulation, it would seem prudent for a legislator to choose someone else to run a fundraiser, just to avoid the controversies which may arise.

Here is the Notice that Sen. Kidani filed with the Campaign Spending Commission. The Person in Charge of Fundraiser is given as Alicia Maluafiti.