Preventing the counties from protecting the health of their citizens seems to be the objective of a Hawaii state senator, as reported by Civil Beat in Chad Blair’s story, Did Hawaii Sen. Nishihara Just Breathe New Life Into a Dying Biotech Bill? (Civil Beat, 1/3/2014). The “dying biotech bill” masquerades as kind of a “right to farm” bill, but could have been better described as a “GMO protection act,” which is a whole other thing.

Why would the chair of the Senate’s AG committee take radical action to remove the public from the loop on a key agriculture bill? See below.

Keep in mind that we in Hawaii don’t get to eat the corn that is grown on these huge GMO farms. Regardless of how you feel about GMO, protecting the income of the GMO chemical companies does not put food on our table or contribute to Hawaii’s food security. Monocropping does not protect or enhance the quality of the ag land they monopolize. The GMO issue is intertwined with pesticide use concerns that deserve thrashing out at the Legislature with full input from the public.

Blair describes how language mired in the “dying” bill, SB3058, has been sucked out and stuffed into a formerly empty bill, SB110. SB3058 was assigned a cumbersome path through the Senate—no doubt so that it would not succeed. The new bill has super powers—it can pass through the Senate without public testimony.

That bill is now a “Zombie” bill. SB110 suddenly is undead. It will actually come to life tomorrow, after a hastily called committee hearing that prohibits public testimony. Like a zombie, it is going to be difficult to stop.

SB110 was an old bill carried over from 2013 without content, a so-called “short-form bill,” which tomorrow will have the language sucked out of SB3058. Worse, it is scheduled for decision making ONLY tomorrow, with just one day’s notice (note that the Senate, unlike the House, does not seem to have a rule against shortchanging the public of adequate notice). Predictably, the Chair (Sen. Nishihara) will instruct his committee on how to vote. And they will obediently fall in line.

The problem with SB3058, as described accurately by Civil Beat, is that it is unlikely to make its way through the multiple hearings it was assigned. This Zombie bill has only a single assignment—Senator Nishihara’s committee. Tomorrow (Tuesday, 2/4/2014). And no testimony will be accepted.

Effectively, it will not have been “heard” by the committee according to any definition of the word “heard” that I understand. And that will be it for the Senate.

Of course, this made me wonder what could possibly motivate a legislator to double-cross his constituents?

Perhaps it depends on the definition of “constituents.”

Below is a mandatory report of a fundraiser for Sen. Nishihara held just two months ago.

The recommended contribution for that fundraiser is posted as $500, not an amount likely to be affordable for the average voter. To a corporation, that amount would be a cheap investment.

But look: the form lists the “Person in Charge of Fundraiser” as Alicia Maluafiti. Where have you seen that name before? In letters to the editor defending GMO crops, perhaps. Maluafiti is a skilled lobbyist, registered with the Ethics Commission as a lobbyist for the Biotech Industry Organization and the Hawaii Crop Improvement Association among other organizations.

As to Hawaii Crop Improvement Association, the Executive Director of the State Ethics Commission wrote, in a letter to legislators in 2012 referring to a proposed “Taste of AG” extravaganza to be held on the grounds of the State Art Museum, across the street from the Capitol:

The event was clearly aimed at state legislators. It was sponsored by the Hawaii Farm Bureau Federation (a big GMO supporter) and the HCIA:

The problem at that point was that legislators were invited to attend, at no charge, an event with value greater than the gift law allowed. See: First ethics challenge of the 2012 session—state legislators warned not to attend farm feast worth $50 in fancy food (1/10/2012).

The event featured a superstar chef, Chef Hiroshi Fukui from the fancy Hiroshi Eurasian Tapas restaurant. Truly, it must have been a rare opportunity for lobbyists to hobnob with lawmakers and for lawmakers to partake of treats the rest of us could likely not easily have afforded.

Ultimately, the Ethics Commission decided that legislators could attend if they paid their own way. And many did. Your intrepid reporter was nearby. A few quick pics with a zoom lens revealed who was there mingling with some of Hawaii’s top lobbyists (click for larger). Finally, one more connection: The HCIA's 990 form filed with the IRS shows that the Executive Director of the HCIA is: Alicia Malufiti. The industry lobbyist. The same person who ran Sen. Nishihara's campaign fundraiser just two months ago.

And so no public testimony will be accepted at tomorrow’s public hearing on the bill to deprive counties of the ability to protect the health of their citizens. 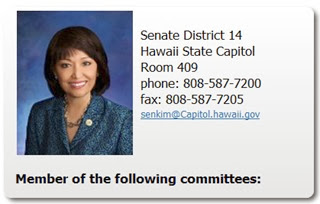 What to do? Perhaps only the Senate President can successfully intervene.

Or there could be objections on the Senate floor, I imagine. It will be a bit of work. If the bill crosses over, the action will shift to the House.

The public will have a chance to testify on this bill once the substantive language is inserted. The notice (http://www.capitol.hawaii.gov/session2014/hearingnotices/HEARING_AGL_02-04-14-1_.HTM) clearly states:

"The purpose of this decision making meeting is to insert substantive provisions into the following short form bill. A public hearing will be scheduled at a later date, at which point testimony will be accepted."


mahalo larry for the backstory and suggestion to e.mail the senate prez


@Anonymous 11:02:00 PM: The original bill had a triple referral. Testimony would have been taken. This maneuver short-circuits the legislative process. There's now only a single referral with no testimony on whether that's a good thing or not. And not only does a lobbyist have the Chair's ear, but she ran his fundraiser. I think concerned citizens have a right to be, well, concerned.