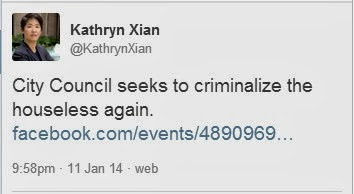 With permission, here is her Facebook event post. Please do not simply reproduce the talking points in your own testimony—study them as a basis for your own words. See below for instructions for submitting testimony.

Again, to be effective, everyone’s testimony should be original and not repeat the words in the talking points.

Please submit testimony and/or show up for the hearing on Tuesday, Jan. 14th at 9am at the City Council Committee room at Honolulu Hale. Spread the word!

You may submit online before Tuesday (1/14):

The link to email your testimony:
http://www1.honolulu.gov/council/emailpsed.htm

1) This bill is unnecessary and would duplicate existing law--laws which may soon be found unconstitutional.

2) The City has already spent over $300,000 in recent weeks removing the houseless from sidewalks, this measure would ensure that the homeless be jailed in our overcrowded prison system, costing taxpayers more.

3) Criminalizing the houseless has proved, in other cities (San Francisco, Los Angeles, South Carolina, Massachusetts), to be massively ineffective and only succeeds in wasting taxpayer dollars.

4) There is no doubt that this bill will disproportionately affect the houseless. Read Bill 6, above.

5) Currently, there are not enough beds at shelters to accommodate the more than 7500 diverse houseless persons that this bill will affect. IHS has a total of 390 beds with less than 90 available. Next Step shelter is often full and must turn away people.

6) Criminalizing the houseless is not only ineffective but also a human rights violation. The UN has called upon the United States to repeal laws criminalizing homelessness http://www.unmultimedia.org/radio/english/2012/04/united-states-urged-to-repeal-laws-criminalizing-homelessness/