Guardian: NSA collecting data from apps like Angry Birds, and can even turn on your phone’s mike and listen 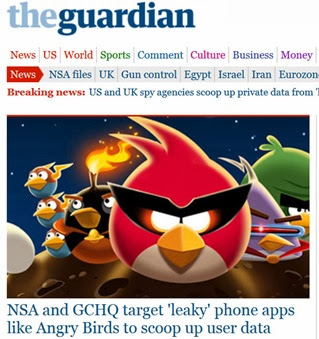 Do you play Angry Birds? If so, the NSA knows quite a bit about you.

By stealing data out of the apps you use, according to an article in today’s Guardian, the NSA even can determine your specific sexual preferences.

The National Security Agency and its UK counterpart GCHQ have been developing capabilities to take advantage of "leaky" smartphone apps, such as the wildly popular Angry Birds game, that transmit users' private information across the internet, according to top secret documents.

The data pouring onto communication networks from the new generation of iPhone and Android apps ranges from phone model and screen size to personal details such as age, gender and location. Some apps, the documents state, can share users' most sensitive information such as sexual orientation – and one app recorded in the material even sends specific sexual preferences such as whether or not the user may be a swinger.

Part of the genius of dribbling out the Edward Snowden data a little bit at a time is that it ought to keep the public’s anger level high. If the above revelations don’t make you angry, maybe the next batch will.

As the article explains, even the photos that smartphone users upload to Facebook and other sites contain EXIF data that gives the NSA details such as the location the photo was taken. The NSA computers put together anything they can get on you:

Depending on what profile information a user had supplied, the documents suggested, the agency would be able to collect almost every key detail of a user's life: including home country, current location (through geolocation), age, gender, zip code, martial status – options included "single", "married", "divorced", "swinger" and more – income, ethnicity, sexual orientation, education level, and number of children.

Not mentioned in the article is that all levels of government share information. Hawaii has a “fusion center,” so all of that information may be shared with local police. We’ll never know what they are sharing, of course.

Not angry yet? Please click on the link above and go to the Guardian article.

Let me close with this snip from the same article:

An ability to make the phone's microphone 'hot', to listen in to conversations, is named "Nosey Smurf".